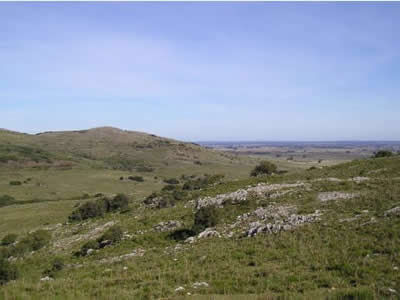 Sierra de las Animas
I got up early to ascend the Sierra de las Animas. This & Pan de Azucar are well known land-marks in navigating the Plata; I should guess their height to be about 8 or 900 feet. The scenery, by the aid of the rising sun almost looked pretty. From the top there was a very extensive view. To the West over a very flat country to the Mount at M. Video, & to the East over the mamillated plains of Maldonado.
On the summit there were several small heaps of stones; which evidently had been there for many years, my companion, an inhabitant of the place, declared it was work of the Indians in the old times. They were like, although on a smaller scale, the heaps so common in the Welsh Mountains: How universal is the desire of Man to show he has ascended the highest points in every country. In the evening I again partook & suffered from the overpowering hospitality in the house of Don Fran Pimiento: & the next morning started for Maldonado.
Posted by Arborfield at 10:45

Hi there, just wanted to drop a note and say I read every one of these diary posts. Maybe you don't get a lot of comments but I wouldn't want you to take that to mean folks aren't reading...

Hi! I live in Sierra de las Animas.
It´s a beautiful place. On saturday y will wake up early to ascend.. Jus t like Darwin did 181 years ago.
Anybody wants to join me?