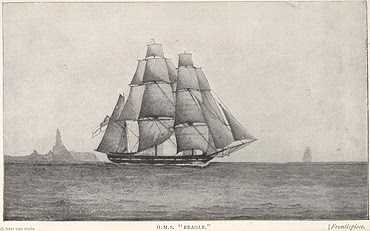 Got under weigh, we only managed to reach an outer harbor when the wind failing, obliged us to anchor for the night: on the following day we with difficulty got an offing by beating against the swell of anything but "Pacific" Ocean. We were all glad to leave Chiloe; at this time of year nothing but an amphibious animal could tolerate the climate. Even the inhabitants have not a word to say in its favor; very commonly I was asked what I thought of the Island; ¿no es muy mala? is it not a miserable place? I could not muster civility enough to contradict them.

In summer, when we return, I dare say Chiloe will wear a more cheerful look. I hear of swarms of insects at that season; this plainly tells me there must be a wide difference between this country & Tierra del Fuego (although at present appearing nearly the same). In the latter place in the midst of summer, the air can boast of few inhabitants; the insect world requires a more genial climate. Besides the Climate, it is disagreeable to see so much poverty & discontent. Poverty is a rare sight in S. America; even here it is not the poverty of Europe; there is an abundance of plain food, coarse clothes, & fire-wood; but the poverty lies in the difficulty of gaining sufficient to buy even the smallest luxuries.

The greater part of the inhabitants are strongly inclined to the old Spanish cause (it is well known with what difficulty they were conquered by the Patriot forces), this feeling is kept up by their having reaped no advantages by the revolution. The grand advantage in other parts is the cheapness of Europæn articles of luxury, of these the inhabitants of Chiloe can afford to enjoy but very few.

Many of the old men whom I talked with, had good cause to regret former times; they had been veterans in the Spanish armies, & with the fall of the Spanish flag of course they have lost the half-pay to which during their whole lives they had been looking forward to. Seventeen of the inhabitants were executed, when the first Governor arrived from the Patriots, for having faithfully served their kings: these things must rankle long in the minds of men who live the uniform & retired life such as the inhabitants of Chiloe.

Captain Fitzroy’s Journal:
A supply of fresh provisions and good rates for the chronometers were obtained, after which we sailed for Valparaiso.
Posted by Arborfield at 07:44