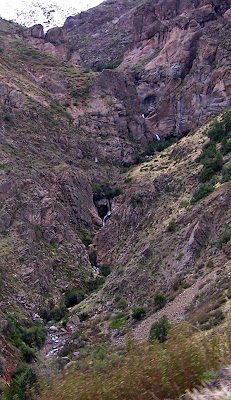 Valparaiso
I rode one day to the last house in the valley; shortly above, the Cachapual divides into 2 deep tremendous ravines which penetrate right into the great range. I scrambled up one very high peaked mountain, the height of which could not be much less than 6000 feet; here, as indeed everywhere else scenes presented themselves of the highest interest. — It was by one of these ravines (valle del Yeso) that Pinchero entered & ravaged Chili. — This is the same man whose attack on an Estancia at R. Negro I have described. — He was a Renegade Spaniard, who collected a great body of Indians together, & established himself by a stream in the Pampas, which none of the forces sent after him could ever find.— From this point he sallied forth, & crossing the Cordilleras by unknown passes, ravaged Chili & drove the flocks of cattle to his own recret rendezvous. — This man was a capital horseman, & he made all round him equally good, for he invariably shot any person who even hesitated to follow him. It was against this man & other wandering tribes of true Indians, that Rosas waged the war of exterminations. — I have since heard from B. Ayres, that this was not so completely effected as it was supposed. The Indians had decamped 8 or 10 hundred miles & were hovering in great numbers about the borders of Cordova.
Posted by Arborfield at 08:15