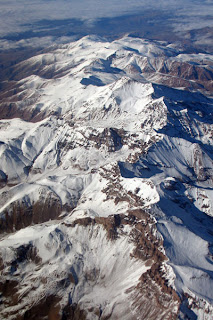 Having not written in his Journal for weeks, Charles today records one of his longest entries.

Chiloe.
The day rose splendidly clear: The Volcano of Osorno was spouting out volumes of smokes; this most beautiful mountain, formed like a perfect cone & white with snow, stands out in front of the Cordillera. Another great Volcano, with a saddle shaped summit, also emitted from its immense crater little jets of steam or white smoke. Subsequently we saw the lofty peaked Corcobado, well deserving the name of "el famoso Corcovado". Thus we saw at one point of view three great active Volcanoes, each of which had an elevation of about seven thousand feet. In addition to this, far to the South, there were other very lofty cones of snow, which although not known to be active must be in their origin volcanic. — The line of the Andes is not, however, in this neighbourhead nearly so elevated as in Chili, neither does it appear to form so perfect a barrier between the regions of the earth. — This great range though running in a North & South line, from an occular deception always appeared more or less semicircular; because the extreme peaks being seen standing above the same horizon with the nearer ones, their much greater distance was not so easily recognized.

When landing on a point to take observations, we saw a family of pure Indian extraction; the father was singularly like to York Minster; some of the younger boys, with their ruddy complexions, might be mistaken for Pampas Indians. Everything I have seen convinces me of the close connection of the different tribes, who yet speak quite distinct languages. — This party could muster but little Spanish & talked to each other in their own dialect. — It is a pleasant thing in any case to see the aboriginal inhabitants, advanced to the same degree of civilization, however low that may be, which their white conquerors have attained. — More to the South we saw many pure Indians, indeed some of the Islands as Chauques &c &c have no other inhabitants but those retaining the Indian surname. — In the census of 1832 there were in Chiloe & its dependencies 42 thousand souls, the greater number of these appear to be little copper-colored men of mixed blood. — Eleven thousand actually retain their Indian surname, but probably not nearly all their pure blood & they are all Christians; dress & manners of living like the rest of the poor inhabitants; cultivating potatoes & picking up, like their brethren in T. del Fuego, shellfish at low water. — They however to this day hold superstitious communication in caves with the devil; the particulars of the ceremony are not known; because formerly every one convicted of this offence was sent to the inquisition at Lima. — Many of the people who are not included in the eleven thousand cannot be told by their appearance from Indians. Gomez, the governor of Lemuy, is descended from noblemen of Spain on both sides, but by constant intermarriages with natives, the present man is an Indian. — On the other hand, the Governor of Quinchao boasts much of his pure Spanish blood. — The Indians belong to the tribes of the Chawes (or Chahues) and Ragunos, who both speak dialects of the Beliche language. — They are not however believed to be the original inhabitants of Chiloe; but rather the Bybenies, who speak quite a distinct language. This nation, when they found so many intruders, migrated, no one knows exactly where; Mr Lowe on a sealing voyage met a large party of Indians in the channels South of C. Tres Montes; they had canoes built of plank like the Periaguas & pulled by oars; & in the head of each canoe there was a cross. — Were not these men descended from the ancient inhabitants of Chiloe? The Chawes & Ragunos are believed to be descended from Indians sent from the North to the first Spanish settlers "en nomiendas commendo", that is to be taught the Christian religion & in return to work, in short be slaves to their Christian teachers; & likewise from a large tribe, who remained faithful at the surprisal of Osorno & other Spanish towns: they were given at first the territory of Cabluco, from whence they have spread over other Islands. — Of the original Bybenies only a few families remain, chiefly in Caylen, & these have lost their own dialect. The Indians yet retain their Caciques, but they scarcely have any power;3 when the land-surveyor or other government officer visits their village the Cacique appears with a silver-headed cane. — (all the above particulars I heard from Mr Douglas who is employed in the boats as a pilot, & has been long resident in the island).

We reached at night a beautiful little cove North of the Isd of Caucahue; the people here were all related one to the other & complained of the want of land. — This is partly owing to their own negligence in not clearing the woods & partly to restrictions of the Government, which makes it necessary before buying ever so small a piece to pay two shillings to the Surveyor for measuring each quadra (150 yards square) & whatever price he fixes for the value of the land. — After his valuation, the land must be put up three times to auction & if no one bids more, the purchaser can have it at that rate. — All these enactions must be a serious check to clearing the ground, where the inhabitants are so extremely poor. — In most countries, forests are removed without much difficulty by the aid of fire, in Chiloe however from the damp nature of the climate & sort of trees, it is necessary first to cut them down: this is a heavy injury to the prosperity of Chiloe. — In the time of the Spaniards the Indians could not hold land; but a family after having cleared a piece of ground might be driven away & the property seized by Government. — The Chilian authorities are now performing an act of justice by making retribution to these poor Indians, by giving to each Cacique twelve quadras of land, to his widow six, to any man who has served in the militia the same number, & to the aged four. — The value of uncleared land is very little. Government gave Mr Douglas, the present surveyor, who was kind enough to give me the above information, eight & a half square miles of forest near S. Carlos in lieu of a debt, this he sold for 350 dollars or about seventy pounds sterling.
Syms Covington Journal:
We were up with the break of day every morning, took breakfast and sailed; and every afternoon found a creek or inlet to anchor in, allowing sufficient time to get every thing that was necessary on shore before dark. During our passage from place to place, we had many fine views of the Cordillera, and also of some of its active volcanoes, from which we could see from the distance, vast volumes of smoke arising, as if from a furnace only on so great a scale.
Posted by Arborfield at 08:18