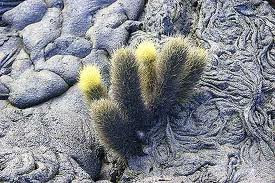 Galapagos
This is situated nearly in the centre of the Island, about 4 &½ miles inland, & elevated perhaps 1000 ft above the sea. — The first part of the road passed through a thicket of nearly leafless underwood as in Chatham Isd — The dry Volcanic soil affording a congenial habitation only to the Lizard tribe. — The wood gradually becomes greener during the ascent. — Passing round the side of the highest hill; the body is cooled by the fine Southerly trade wind & the eye refreshed by a plain green as England in the Spring time. — Out of the wood extensive patches have been cleared, in which sweet Potatoes (convolvulus Batata) & Plantains grow with luxuriance.

The houses are scattered over the cultivated ground & form what in Chili would be called a "Pueblo". — Since leaving Brazil we have not seen so Tropical a Landscape, but there is a great deficiency in the absence of the lofty, various & all-beautiful trees of that country. — It will not easily be imagined, how pleasant the change was from Peru & Northern Chili, in walking in the pathways to find black mud & on the trees to see mosses, ferns & Lichens & Parasitical plants adhæring. — Owing to an unusual quantity of rain at this time of year, I suspect we have seen the Island at its full advantage. — I suspect this the more from meeting with singularly few insects of any of the orders. — If such luxuriance is constant this scarcity of its universal concomitants is very remarkable — The inhabitants are in number 200–300: nearly all are people of color & banished for Political crimes from the State of the Equator (Quito & Guyaquil &c) to which this Archipelago belongs. — It appears the people are far from contented; they complain, here as in Chiloe, of the deficiency of money: I presume there is some more essential want than that of mere Currency, namely want of sale of their produce. — This of course will gradually be ameliorated. — already on an average, in the year 60–70 Whaling vessels call for provisions & refreshment.

The main evil under which these islands suffer is the scarcity of water. — In very few places streams reach the beach so as to afford facilities for the watering of Shipping. Every where the porous nature of the Volcanic rocks has a tendency to absorb without again throwing up the little water which falls in the course of the year. — At the Settlement there are several springs & small pools, three or four of which are said never to fail. — Generally the islands in the Pacifick are subject to years of drought & subsequent scarcity; I should be afraid this group will not afford an exception.

The inhabitants here lead a sort of Robinson Crusoe life; the houses are very simple, built of poles & thatched with grass. — Part of their time is employed in hunting the wild pigs & goats with which the woods abound; from the climate, agriculture requires but a small portion. — The main article however of animal food is the Terrapin or Tortoise: such numbers yet remain that it is calculated two days hunting will find food for the other five in the week. — Of course the numbers have been much reduced; not many years since the Ship's company of a Frigate brought down to the Beach in one day more than 200,— where the settlement now is, around the Springs, they formerly swarmed. — Mr Lawson thinks there is yet left sufficient for 20 years: he has however sent a party to James Island to salt (there is a Salt mine there) the meat. — Some of the animals are there so very large, that upwards of 200 Lbs of meat have been procured from one. — Mr Lawson reccollect having seen a Terrapin which 6 men could scarcely lift & two could not turn over on its back. These immense creatures must be very old, in the year 1830 one was caught (which required 6 men to lift it into the boat) which had various dates carved on its shells; one was 1786. — The only reason why it was not at that time carried away must have been, that it was too big for two men to manage. — The Whalers always send away their men in pairs to hunt.

Captain Fitzroy’s Journal
Mr. Nicholas O. Lawson, acting for the governor of this archipelago, came on board. With him and me a party went to another anchorage called Black Beach Road, landed, and walked up towards the settlement. In 1832, the republic of the 'Ecuador' decided to use these islands as a place of banishment, and sent a small colony to Charles Island. 'La Floriana' is the name given to this island by the Guayaquilians, though by the Spaniards it was once called 'Santa Maria de l'Aguada.' The governor, at the time of our visit, was Don José Villamil. There were then about eighty small houses, or huts, and nearly two hundred souls upon the island, most of whom were convicts.

After walking rather more than a mile along a good path, through the underwood (which as the ground rises becomes very thick), we reached a small spring of water, near which are a few huts, but no cultivated ground. The water from this spring might be conveyed to shipping by means of leaden pipes, without much difficulty, but it is not of very good quality. Having ascended gradually during another half-hour's walk, we reached the ridge of that height which limited our view from the sea; when surprisingly sudden and agreeable was the change. Heated and tired by a dusty uphill walk, through sun dried trees and over rugged lava stones, our bodies were here refreshed by a cool breeze, while our eyes enjoyed the view of an extensive, fertile and cultivated plain. Surrounded by tropical vegetation, by bananas, sugar canes, Indian corn, and sweet potatoes, all luxuriantly flourishing, it was hard to believe that any extent of sterile and apparently useless country could be close to land so fertile, and yet wear the most opposite appearance. Our eyes having been accustomed to the desert shores of Peru and northern Chile, during many months, were completely dazzled by a sight so new and unforeseen.

It appears that rain falls very frequently on these higher grounds, and is absorbed by rich black mould of a nature sufficiently clayey to enable it to retain moisture. During the wet season this plain becomes quite muddy, while the little rain that falls on the lower ground is so quickly absorbed, or finds its way so soon through the loose lava stones that its effects are not there visible.

Most of the houses are in this fertile space, but it appears that a house on the dry ground, and plantations in the moist valley, would answer better: for at Mr. Lawson's house salt cannot be kept dry, books and paper become mouldy, and iron rusts very quickly. At his table we found the welcome of a countryman, and a variety of food quite unexpected in the Galāpagos Islands, but fully proving their productiveness. At the foot of a hill we saw water dropping plentifully, and from this spring, called the "Governor's Dripstone," the inhabitants obtain a certain supply throughout the year.

Although most of the settlers were sent here against their wish, there are many who do not desire to return to the continent. Some are married and have children on the island.

In a small cave near the "governor's dripstone," an old sailor lived during several years: he had been unfortunate, and was tired of the world. Terrapin and potatoes were his food, till a former friend, the master of a whaler, recognised him, and carried him away by force. So strongly was the old man attached to his cave, that he shed tears when taken away.

There are goats and hogs upon this island, but they are scarce and wild, not having yet had time to increase much; they are hunted with dogs, though it would be wiser to let them alone for a few years. The settlers have abundance of vegetables, and depend chiefly upon terrapin for their meat. Many of these animals being large and heavy, the people who go in search of them kill and open them on the spot, then take out the fleshy pieces and put them in a bag. Thus one man can carry away the useful parts of more terrapins than several men could lift.

The quantity of tortoise shells lying about the ground, shows what havock has been made among these helpless animals. On the lower ground, near the spring, I saw an apology for a garden, in which the large terrapin shells were used to cover young plants, instead of flower pots. In a place one has not seen before, some marked peculiarity occasionally reminds one, more forcibly than the ordinary novelties of scenery, that all around is strange and new. The palm-trees and arid appearance of St. Jago, the sedan chairs of Bahia, the boats of Rio de Janeiro, the beef carts of Monte Video, the travelling waggons of Buenos Ayres, the 'toldo' of the Patagonian, the wigwam of the Fuegian, the wooden houses and clogs of San Carlos de Chilóe, the stockades of Valdivia, the effects of earthquake at Concepcion, the concentrated bustle of Valparaiso, the quiet and uniform serenity of Coquimbo, women riding astride and troops of ill-used donkeys at Lima, are a few instances among the multitude of such local peculiarities.

Small birds are numerous on this island, and so remarkably tame that they may be knocked down with a stick. Lizards are also numerous; and there are a few small snakes, but those we caught were not venomous. Among the useful vegetables we noticed the plaintain, pumpkin, yuca, Quito orange, castor oil plant and melon, besides those before mentioned.

Returning on board we met Mr. Stokes on his way from the southern parts of the island: he described the lava thereabouts as having such a form and rugged surface as the sea would present if suddenly congealed, while ruffled by a very strong wind.
Posted by Arborfield at 08:46