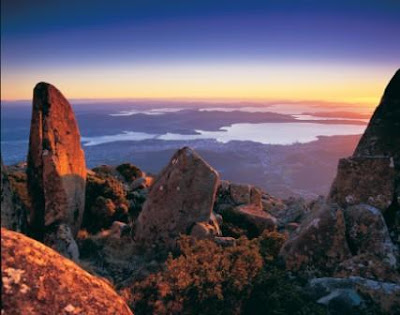 Hobart
I ascended Mount Wellington. I made the attempt the day before, but from the thickness of the wood failed. — I took with me this time a guide, but he was a stupid fellow & led me up by the South or wet side. Here the vegetation was very luxuriant & from the number of dead trees & branches, the labor of ascent was almost as great as in T. del Fuego or Chiloe, — It cost us five & a half hours of hard climbing before we reached the summit. — In many parts the gum trees grew to a great size & the whole composed a most noble forest. — In some of the dampest ravines, tree-ferns flourished in an extraordinary manner; — I saw one which must have been about twenty five feet high to the base of the fronds, & was in girth exactly six feet: — the foliage of these trees forming so many most elegant parasols created a shade gloomy like that of the first hour of night. — The summit of the mountain is broard & flat & is composed of huge angular masses of naked greenstone; its elevation is 3100 ft above the level of the Sea. — The day was splendidly clear & we enjoyed a most extensive view. — To the Northward the country appeared a mass of wooded mountains of about the same elevation & tame outline as the one on which we stood. To the South the intricate outline of the broken land & water forming many bays was mapped with clearness before us. — After staying some hours on the summit we found a better way to descend, but did not reach the Beagle till eight oclock, after a severe day's work.

Syms Covington Journal
The land is high and mountainous, Mt. Wellington the highest near town. I went up to the summit its summit, February 11th. From the town to the top is about eight or nine miles, I should suppose, but on very intricate roads. Its top is rugged, with low bushes and fresh water in small pools. The lake that is said to be there, is merely a small pool. Snipes are to be shot on summit occasionally or in season. The land here is much higher than at Sydney.
Posted by Arborfield at 08:28