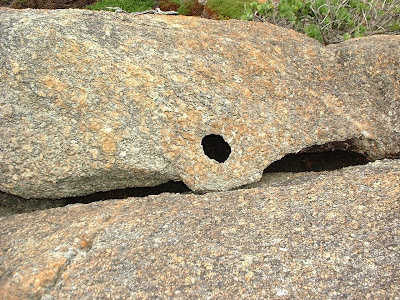 King George's Sound
One day I accompanied Capt. FitzRoy to Bald head; this is the spot mentioned by so many navigators, where some have imagined they have seen Coral & other trees petrified in the position in which they grew. — According [to] our view of the case, the rocks have been formed by the wind heaping up Calcareous sand, which by the percolation of rain water has been consolidated & during this process enclosed trees, roots & land shells. — In time the wood would decay & as this took place, lime was washed into the cylindrical cavities & became hard like stalactites. — The weather is now again in parts wearing away these soft rocks & hence the harder casts of roots & branches stand out in exact imitation of a dead shrubbery. — The day was to me very interesting, as I had never before heard of such a case.

Captain Fitzroy’s Journal
Most of the aborigines had rather good countenances, and well-formed heads, as compared with those about Sydney, or in Van Diemen's land. The lathy thinness of their persons, which seemed totally destitute of fat, and almost without flesh, is very remarkable. I have since seen some drawings of South African aborigines, executed under the critical eye of Doctor Andrew Smith, by the correct hand of Mr. Charles Bell, which are so like the natives who live near King George Sound in colour, as well as countenance, and extraordinary shape, that they might be taken for full-length portraits of the latter instead of Africans.

Many of these natives have features smaller and less marked than are usual among savages; but their foreheads are higher and more full: they are not tall, few exceeding five feet eight inches in height: and the women are wretched objects. Some of the men had pieces of bone stuck through the cartilage of the nose, which, I heard, was to prevent their being killed by another tribe, who were seeking to revenge the death of one of their own party. I was told also, that when any death occurs in one tribe, the first individual of another that is encountered is sacrificed by the bereaved party, if strong enough; but I suspect my informant confused revenge for manslaughter with the strange story—that for every death in one tribe, however caused, a life must be taken from another. Should it be true, however, the scarcity of aboriginal population would have an explanation in addition to those which various writers have given. These natives bury their dead in a short grave; the body being laid on its side, with the knees drawn up to the chin.
Posted by Arborfield at 07:52