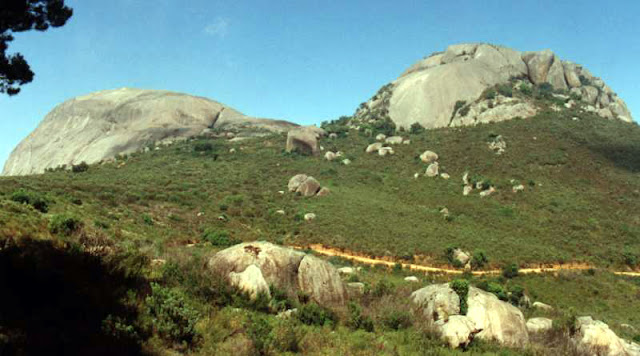 I set out on a short excursion to see the neighbouring country, but I saw so very little worth seeing, that I have scarcely anything to say. I hired a couple of horses & a young Hottentot groom to accompany me as a guide. he spoke English very well, & was most tidily drest; he wore a long coat, beaver hat, & white gloves! The Hottentots, or Hodmadods as old Dampier calls them, to my eye look like partially bleached negroes; they are of small stature, & have most singularly formed heads & faces. The temple & cheek bones project so much, that the whole face is hidden from a person standing in the same side position, in which he would be enabled to see part of the features of a European. Their hair is very short & curly.
Our first days ride was to the village of the Paarl, situated between thirty & forty miles to the NE of the Cape town. After leaving the neighbourhood of the town, where white houses stand as if picked out of a street & then by chance dropped down in the open country, we had to cross a wide level sandy flat totally unfit for cultivation. In the hopes of finding some hard materials, the sands have been bored along the whole line of road to the depth of forty feet. Leaving the flat, we crossed a low undulating country thinly clothed with a slight, green vegetation. This is not the flowering season, but even at the present time, there were some very pretty oxalis's & mesembryanthemums, & on the sandy spots, fine tufts of heaths. Even at this short distance from the coast, there were several very pretty little birds. — If a person could not find amusement in observing the animals & plants, there was very little else during the whole day to interest him: only here & there we passed a solitary white farm house.
Directly after arriving at the Paarl, I ascended a singular group of rounded granite hills close behind the village. I enjoyed a fine view from the summit; directly in front extended the line of mountains which I had to cross on the following morning. Their colors were grey, or partly rusty red, their outlines irregular but far from picturesque. The general tint of the lower country was a pale brownish green & the whole entirely destitute of wood-land. In the naked state of the mountains, seen also through a very clear atmosphere, I was reminded of Northern Chili, but the rocks there possess at least a brilliant colouring.
Immediately beneath the hill on which I was standing the long village of the Paarl extended, all the houses were very tidy & comfortable & white-washed; there was not a single hovel. Each house had its garden & a few trees planted in straight rows, & there were many considerable vineyards being at this time of year destitute of leaves. The whole village possessed an air of quiet & respectable comfort.
Posted by Arborfield at 07:24