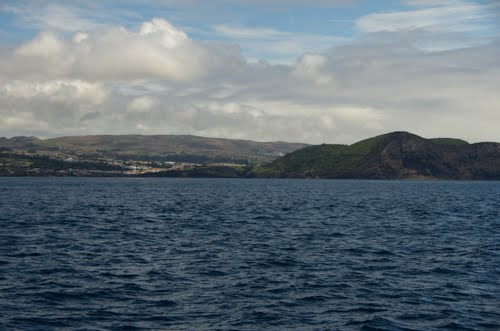 The next day the Consul kindly lent me his horse & furnished me with guides to proceed to a spot, in the centre of the island, which was described as an active crater. — Ascending in deep lanes, bordered on each side by high stone walls, for the three first miles, we passed many houses and gardens. We then entered on a very irregular plain country, consisting of more recent streams of hummocky basaltic lava. The rocks are covered in some parts by a thick brushwood about three feet high, and in others by heath, fern, & short pasture: a few broken down old stone walls completed the resemblance with the mountains of Wales. I saw, moreover, some old English friends amongst the insects, and of birds, the starling, water wagtail, chaffinch and blackbird. There are no houses in this elevated and central part, and the ground is only used for the pasture of cattle and goats. On every side, besides the ridges of more ancient lavas, there were cones of various dimensions, which yet partly retained their crater-formed summits, and where broken down showed a pile of cinders such as those from an iron foundry. — When we reached the so called crater, I found it a slight depression, or rather a short valley abutting against a higher range, and without any exit. The bottom was traversed by several large fissures, out of which, in nearly a dozen places, small jets of steam issued, as from the cracks in the boiler of a steam engine.
The steam close to the irregular orifices, is far too hot for the hand to endure it; — it has but little smell, yet from everything made of iron being blackened, and from a peculiar rough sensation communicated to the skin, the vapour cannot be pure, and I imagine it contains some muriatic add gas. — The effect on the surrounding trachytic lavas is singular, the solid stone being entirely converted either into pure, snow white, porcelain clay, or into a kind of bright red or the two colours marbled together: the steam issued through the moist and hot clay. This phenomenon has thus gone on for many years; it is said that flames once issued from the cracks. During rain, the water from each bank, must flow into these cracks; & it is probable that this same water, trickling down to the neighbourhood of some heated subterranean lava, causes this phenomenon. — Throughout the island, the powers below have been unusually active during the last year; several small earthquakes have been caused, and during a few days a jet of steam issued from a bold precipice overhanging the sea, not far from the town of Angra.
I enjoyed my day's ride, though I did not see much worth seeing: it was pleasant to meet such a number of fine peasantry; I do not recollect ever having beheld a set of handsomer young men, with more good humoured pleasant expressions.1 The men and boys are all dressed in a plain jacket & trowsers, without shoes or stockings; their heads are barely covered by a little blue cloth cap with two ears and a border of red; this they lift in the most courteous manner to each passing stranger. Their clothes although very ragged, appeared singularly clean, as well as their persons; I am told, that in almost every cottage, a visitor will sleep in snow white sheets & will dine off a clean napkin. Each man carries in his hand a walking staff about six feet high; by fixing a large knife at each extremity, they can make this into a formidable weapon. — Their ruddy complexions, bright eyes & erect gait, made them a picture of a fine peasantry: how different from the Portugeese of Brazil! — The greater number, which we this day met, were employed in the mountains gathering sticks for fire-wood. — A whole family, from the father to the least boy, might be seen, each carrying his bundle on his head to sell in the town. Their burthens were very heavy; this hard labour & the ragged state of their clothes too plainly bespoke poverty, yet I am told, it is not the want of food, but of all luxuries, a case parallel to that of Chiloe. — Hence, although the whole land is not cultivated, at the present time numbers emigrate to Brazil, where the contract to which they are bound, differs but little from slavery. It seems a great pity that so fine a population should be compelled [to] leave a land of plenty, where every article of food, meat, vegetables & fruit, — is exceedingly cheap & most abundant, but the labourer finds his labour of proportionally little value.–
Posted by Arborfield at 07:39