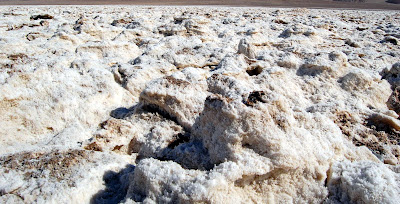 Port St Julian
Again I started with the Captain to the head of the harbour — it suddenly came on to blow hard — so the Captain ran the boat on shore & we & four of the boats crew all armed proceeded on foot. It turned out to a very long walk; in the evening two of the party could not walk any further & we were all excessively tired. It was caused by a most painful degree of thirst; & as we were only 11 hours without water, I am convinced it must be from the extreme dryness of the atmosphere. Earlier in the day we experienced a great mortification; a fine lake was seen from a hill; I & one of the men volunteered to walk there, & not till quite close did we discover that it was a field solid of snow-white salt. The whole party left their arms with the two who were knocked up & returned to the boat. Fresh men were then sent off with some water, & we made a signal fire, so that by 11 o’clock we were all collected & returned to the Ship.

Captain Fitzroy’s Journal:
Having rated their chronometers, the little vessels stood out to sea, in company with the North American sealer; but they had not sailed many miles before the wind increased to a gale, and still becoming stronger, bringing clouds of dust and sand off the land, they were reduced to bare poles, and drifted fast off-shore, as well as northward. When the fury of the gale was over, their balance-reefed foresails were set, and with their tillers unshipped they made very good weather, until they were driven near the tide-races off Cape Blanco, where some anxious hours were passed, half-buried in foam, and the wind again almost a hurricane. Towards evening, the storm abated; our water-soaked explorers succeeded in regaining a position under shelter of the land; and anchored next morning under Cape Blanco, to dry themselves and take observations. In this severe gale, the North American schooner split two close-reefed foresails, lost a boat, and was otherwise damaged.

Lieutenant Wickham and Mr. Mellersh walked a long way from Cape Blanco, to trace the coast, and look out for shoals in the offing; in doing which, they found numerous 'salinas' (extensive hollow places filled with salt), where the solid mass of very white and good salt was several feet in thickness. Guanacoes were numerous, but shy. On the rocks some fur-seal were seen; too few, however, to be worth a sealer's notice.

From “The Voyage of the Beagle”:
The country is nearly similar to that of Port Desire, but perhaps rather more sterile. One day a party accompanied Captain Fitz Roy on a long walk round the head of the harbour. We were eleven hours without tasting any water, and some of the party were quite exhausted. From the summit of a hill (since well named Thirsty Hill) a fine lake was spied, and two of the party proceeded with concerted signals to show whether it was fresh water. What was our disappointment to find a snow-white expanse of salt, crystallized in great cubes! We attributed our extreme thirst to the dryness of the atmosphere; but whatever the cause might be, we were exceedingly glad late in the evening to get back to the boats.
Posted by Arborfield at 07:33