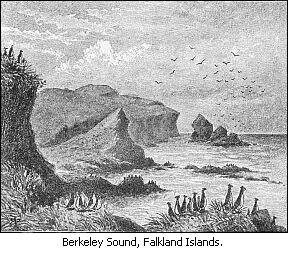 E. Falkland Islands
Arrived in the middle of the day at Berkeley Sound, having made a short passage by scudding before a gale of wind. Mr Smith, who is acting as Governor, came on board, & has related such complicated scenes of cold-blooded murder, robbery, plunder, suffering, such infamous conduct in almost every person who has breathed this atmosphere, as would take two or three sheets to describe. With poor Brisbane, four others were butchered; the principal murderer, Antuco, has given himself up. He says he knows he shall be hanged but he wishes some of the Englishmen, who were implicated, to suffer with him; pure thirst for blood seems to have incited him to this latter act. Surrounded as Mr Smith, with such a set of villains, he appears to be getting on with all his schemes admirably well.

Captain Fitzroy’s Journal:
10th Next day we anchored in Berkeley Sound; first in Johnson Cove, and afterwards in Port Louis.

We found a state of affairs somewhat different from that of March 1833; but though more settled, in consequence of the presence of an established authority, resident at Port Louis (a lieutenant in the navy), my worst forebodings had not equaled the sad reality.

In a previous note, I alluded to the murder of the Buenos Ayrean commanding officer; and to that of Mr. Brisbane. A few weeks before the Clio arrived in 1833, there was a small garrison at Port Louis, consisting of a sergeant's guard of soldiers, a subaltern, and a field officer. The men mutinied because their superior was thought to be unnecessarily severe, and occupied them unceasingly in drill and parade, to the prejudice of their obtaining food sufficient for health. They were obliged, in consequence of his system, to live upon worse fare than the settlers, because they could not go about to forage for themselves; and the result was that, after many threats, they murdered him. A small armed schooner arrived a few days afterwards from Buenos Ayres, by whose officers and crew, assisted by some French sailors, the principal mutineers, nine in number, were taken and put into confinement on board. They were afterwards carried to Buenos Ayres.

On the 26th of August 1833, three 'gauchos' and five Indians (the prisoners before mentioned), set upon and murdered Mr. Brisbane; Dickson, the man in charge of Vernet's store; Simon, the capataz; the poor German; and another settler; after which atrocious acts they plundered the settlement and drove all the cattle and horses into the interior. Only that morning Mr. Low, who was then living with Mr. Brisbane, left Port Louis on a sealing excursion, with four men. Hardly was his boat out of sight, when the deceitful villains attacked Brisbane in Vernet's house: suspecting no treachery, he fell at once by the knife of Antonio Rivero. Simon defended himself desperately, but was overpowered; the others, overcome by fear, fell easy victims. The rest of the settlers, consisting of thirteen men, three women, and two children, remained with the murderers two days, and then escaped to a small island in the Sound; where they lived on birds' eggs and fish, till the arrival of the English sealer Hopeful, on board which was an officer of the navy, who in some measure relieved their immediate distress, but could not delay to protect them from the assaults which they anticipated. About a month after the Hopeful sailed, H.M.S. Challenger, Captain M. Seymour, arrived, having a lieutenant of the navy and four seamen on board, who had volunteered from H.M.S. Tyne, and were duly authorized to remain at the Falklands. The following extract from a letter will show what took place on Captain Seymour's arrival.

"Captain Seymour, and the consuls, being anxious to visit the settlement of Port Louis, landed some distance from it (the wind being strong from S.S.W.), intending to walk there. About a mile from the houses they were met by an Englishman named Channon, sent by the gauchoes to see who they were, and whether the ship was a whaler in want of beef, or a man-of-war. He informed them that the gauchoes and Indians had murdered Mr. Brisbane: Dickson, who had been left in charge of the flag by Captain Onslow: Simon; and two others: and had pillaged the houses, destroying every thing in their search for money. He then pointed them out, sitting under a wall, with their horses behind the remains of the government house, ready saddled for a start on our nearer approach. They had two gauchoes, prisoners, who had not been concerned in the murders, and whom they threatened to kill, if he, Channon, did not return. He also stated that one of them was willing to turn king's evidence, and would bring back all the horses, if possible, provided Captain Seymour would ensure his pardon. The whole of them, nine in number, retreated into the interior as soon as they found out it was a ship of war, taking all the tame horses, between fifty and sixty.* As his party were not armed, Captain Seymour thought it right to return on board; but after dark, Lieutenant Smith was sent with a party of marines, and two boats, to try and take them, if they should be still about the houses, and to leave with Channon a bottle containing a crucifix, as a signal for Luna. On their landing, Lieutenant Smith took all necessary precautions, left six men in charge of the boats, and proceeded cautiously with the rest. He carefully searched every building in the place, without seeing even a trace of them. All was desolation; yet he learned afterwards from the two innocent gauchoes, that Antonio Rivero and another, suspecting who the party were, had watched them closely: that at one time Lieut. Smith was near treading on them; which seemed hardly credible, until the arrangements made on landing, the marching in Indian file to hide his men, &c. were mentioned. Mr. Smith left with Channon Luna's pardon, who, on the fourth day, brought in two horses—not having been able to obtain more, as the murderers were very watchful and fearful of each other, so much so, that one of them had fallen a sacrifice to suspicion; and Luna's desertion reduced their number to six. With Luna for their guide, on the sixth day Lieut. Smith, four midshipmen and twelve marines, were despatched into the interior. They were absent four days, and marched more than a hundred miles, enduring much fatigue, which was increased by the boisterous state of the weather, and by continual rain for three out of the four days. Water in ravines, which on going out hardly rose above their ankles, on their return had increased to torrents: in crossing them some nearly lost their lives, and on the bleak moors they sunk at every step knee-deep in bog. Without sleep or shelter, they lived for the last two days on beef just warmed through, by fires that it took hours to kindle. They were not successful in capturing any of the murderers, but at one time were so near, that they had the mortification to see them drive their horses away at a gallop, and having all the tame ones but two, they were quickly out of reach of musket-shot. So hasty however was their retreat, that they left their provisions behind them. Captain Seymour finding that capturing the Indians would be a tedious and uncertain task, made one of the ruined houses habitable, and leaving six marines as an additional protection to Lieut. Smith and his boat's crew, proceeded as ordered. The lieutenant endeavored to make his abode comfortable, by clearing away rubbish and bones, and putting a garden into some order. With the two horses he succeeded in catching and taming two cows, which gave about two gallons of milk daily, besides fourteen others, five or six of which were in calf. By one means or other all but one of the murderers were taken, and a cutter was hired to remove them to the flag-ship at Rio de Janeiro."

Before the Beagle's arrival Lieut. Smith had succeeded in capturing the principal murderer, and transporting him to an islet in the Sound, where he was watched, and furnished with provisions by the boat's crew. The lieutenant applied to me for assistance, and knowing that he was not safe while such a desperate character as Rivero was at large, though on an islet, and that the life of Luna (the king's evidence) was still more risked, I took those men, and one named Channon, who was said to have been an accomplice in the plot, though not an active agent, on board the Beagle. Rivero was put in irons, Channon confined to the ship, and Luna left at liberty, though watched.

When Mr. Low returned from his sealing expedition he found that his life was sought, as a friend of Mr. Brisbane; and as he could do nothing on foot against the mounted gauchoes, he retired to Kidney Islet, at the entrance of Berkeley Sound, to await the arrival of some ship. Tired, however, of inaction, he set out to go westward, in search of some whaler, and on the 6th of February, when in great distress, he fell in with our tender, the Adventure, and immediately offered his services as a pilot: they were accepted, provisionally, by Lieut. Wickham, and afterwards by me, trusting that the Admiralty would approve of my so engaging a person who, in pilotage and general information about the Falklands, Tierra del Fuego, Patagonia, and the Galapagos Islands, could afford us more information than any other individual, without exception.
.
Mr. William Low is the son of a respectable land-agent in Scotland; he was brought up as a sailor, and possesses strong common sense, quick apprehension, a readiness at description, and an extraordinary local memory.
Posted by Arborfield at 08:07