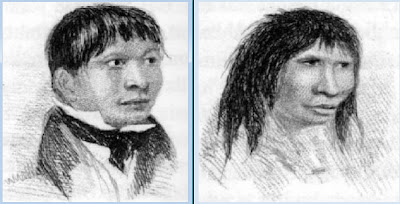 Tierra del Fuego
In the morning, after anchoring in Ponsonby Sound we stood down to Wollya or Jemmy Buttons country. This being a populous part of the country, we were followed by seven canoes. When we arrived at the old spot; we could see no signs of our friends, & we were the more alarmed, as the Fuegians made signs of fighting with their bows and arrows. Shortly afterwards a canoe was seen coming with a flag hanging up: until she was close alongside, we could not recognise poor Jemmy. It was quite painful to behold him; thin, pale, & without a remnant of clothes, excepting a bit of blanket round his waist: his hair, hanging over his shoulders; & so ashamed of himself, he turned his back to the ship as the canoe approached. When he left us he was very fat, & so particular about his clothes, that he was always afraid of even dirtying his shoes; scarcely ever without gloves & his hair neatly cut. I never saw so complete & grievous a change. When however he was clothed & the first flurry over, things wore a very good appearance. He had plenty (or as he expressed himself too much) to eat. Was not cold; his friends were very good people; could talk a little of his own language! & lastly we found out in the evening (by her arrival) that he had got a young & very nice looking squaw. This he would not at first own to: & we were rather surprised to find he had not the least wish to return to England. Poor Jemmy with his usual good feeling brought two beautiful otter skins for two of his old friends & some spear heads & arrows of his own making for the Captain. He had also built a canoe & is clearly now well established. The various things now given to him he will doubtless be able to keep. The strangest thing is Jemmy’s difficulty in regaining his own language. He seems to have taught all his friends some English. When his wife came, an old man announced her, "as Jemmy Buttons wife"! York Minster, returned to his own country several month ago, & took farewell by an act of consummate villainy: He persuaded Jemmy & his mother to come to his country, when he robbed them of every thing & left them. He appears to have treated Fuegia very ill.

Captain Fitzroy’s Journal:
The Beagle anchored at Woollӯa. But few natives were seen as we sailed along: probably they were alarmed at the ship, and did not show themselves.

The wigwams in which I had left York, Jemmy, and Fuegia, were found empty, though uninjured: the garden had been trampled over, but some turnips and potatoes of moderate size were pulled up by us, and eaten at my table, a proof that they may be grown in that region. Not a living soul was visible any where; the wigwams seemed to have been deserted many months; and an anxious hour or two passed, after the ship was moored, before three canoes were seen in the offing, paddling hastily towards us, from the place now called Button Island.

Looking through a glass I saw that two of the natives in them were washing their faces, while the rest were paddling with might and main: I was then sure that some of our acquaintances were there, and in a few minutes recognized Tommy Button, Jemmy's brother. In the other canoe was a face which I knew yet could not name. "It must be some one I have seen before," said I, — when his sharp eye detected me, and a sudden movement of the hand to his head (as a sailor touches his hat) at once told me it was indeed Jemmy Button — but how altered! I could hardly restrain my feelings, and I was not, by any means, the only one so touched by his squalid miserable appearance. He was naked, like his companions, except a bit of skin about his loins; his hair was long and matted, just like theirs; he was wretchedly thin, and his eyes were affected by smoke.

We hurried him below, clothed him immediately, and in half an hour he was sitting with me at dinner in my cabin, using his knife and fork properly, and in every way behaving as correctly as if he had never left us. He spoke as much English as ever, and, to our astonishment, his companions, his wife, his brothers and their wives, mixed broken English words in their talking with him. Jemmy recollected every one well, and was very glad to see them all, especially Mr. Bynoe and James Bennett. I thought he was ill, but he surprised me by saying that he was "hearty, sir, never better," that he had not been ill, even for a day, was happy and contented, and had no wish whatever to change his way of life. He said that he got "plenty fruits," "plenty birdies," "ten guanaco in snow time," and "too much fish." Besides, though he said nothing about her, I soon heard that there was a good-looking young woman in his canoe, who was said to be his wife. Directly this became known, shawls, handkerchiefs, and a gold-laced cap appeared, with which she was speedily decorated; but fears had been excited for her husband's safe return to her, and no finery could stop her crying until Jemmy again showed himself on deck.

While he was below, his brother Tommy called out in a loud tone — "Jemmy Button, canoe, come!" After some time the three canoes went ashore, laden with presents, and their owners promised to come again early next morning. Jemmy gave a fine otter skin to me, which he had dressed and kept purposely; another he gave to Bennett.
Posted by Arborfield at 22:05