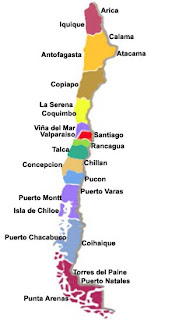 Valparaiso
Chili as may be seen in the maps is a narrow strip between the Cordilleras & the Pacific; & this strip is itself traversed by several lines of high hills parallel to the great range. — At the foot of the Andes there is a succession of level basins, generally connected together & extending chiefly to the South; in these the principal towns are situated, S. Felipe, St Jago, S. Fernando &c. — These basins or plains, together with the flat valleys which connect them with the coast, are the bottoms of ancient inlets & great bays such as the present intersect every part of Tierra del Fuego & the West coast of Patagonia &c. Chili, at one time, must have in the configuration of its land & water exactly resembled these latter countries. This resemblance was occasionally seen with great force when a fog bank extended over the whole of the lower parts; the white vapor curling into all the ravines, beautifully represented the little coves & bays. Here & there a solitary hillock peeping up through the mist showed that it formerly had stood as an islet. — The scenery from the above causes must be I should think nearly unique; anyhow to me it was quite new & very interesting. From the natural slope to seaward of these plains they are, as I have said, very easily irrigated & singularly fertile; without this process, the ground will produce scarcely anything, as the sky during the whole summer is cloudless. — The mountains & hills are dotted over with bushes & low trees, with the exception of this the vegetation is very scanty. Nevertheless many half wild cattle find sufficient pasture. The owners of lands in the plains possess each so much hill country where their cattle feed, & once a year there is a grand "Rodeo" when the cattle are all driven down, marked & counted & a certain number separated for fattening in the artificial fields in the valleys. —

Wheat is extensively cultivated & a good deal of Indian corn; a sort of bean is however the main article of food for the Common Labourers. — The orchards produce an enormous abundance of Peaches, Figs & Grapes. With all these advantages the inhabitants of the country ought to be much more prosperous than they are.
Posted by Arborfield at 07:52