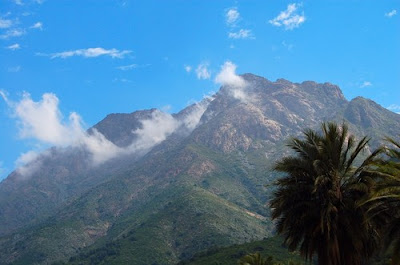 Valparaiso
The Major Domo of the Hacienda was good enough to give me a guide & fresh horses; in the morning we set out to ascend the Campana or Bell, a mountain which is 6400 feet high.* The paths were very bad, but both the geology & scenery amply rapaid the trouble. We reached, by the evening, a spring called the Agua del Guanaco, which is situated at a great height. This must be an old name, for it is very many years since a guanaco has drunk its waters. During the ascent I noticed that on the Northern slope nothing but bushes grew, whilst on the Southern a sort of bamboo about fifteen feet high. In a few places there were palms, & I was surprised to see one at an elevation of at least 4500 feet. This palm is for its family an ugly tree: its stem is very large & of a curious form, being thicker in the middle than at the base or top. They are excessively numerous in some parts of Chili & valuable on account of a sort of honey made from the sap. — On one estate near Petorca they counted many hundred thousand trees; each year in August or September many are cut down, when lying on the ground (& it is necessary, I am told, that the trees should fall up the hill) the crown of leaves is cut off, & the sap begins to flow this continues for many months, but it is necessary every morning that a thin slice should be cut off, so as to expose a fresh surface. A good tree will give 90 gallons of Sap, which must all have been contained in the apparently dry trunk; it is said to flow much more quickly on those days when the sun is powerful. — The sap is concentrated by boiling, & is called honey, which in its taste it resembles. — We unsaddled our horses near the spring & prepared to pass the night. — The setting of the sun was glorious, the valleys being black whilst the snowy peaks of the Andes yet retained a ruby tint.

When it was dark, we made a fire beneath a little arbor of bamboos, fried our charqui (or dried strips of beef), took our matte & were quite comfortable. There is an inexpressible charm in thus living in the open air. — The evening was so calm & still; the shrill noise of the mountain bizcacha & the faint cry of the goatsucker were only occasionally to be heard. Besides these, few birds or even insects frequent these dry parched up mountains.

* A plaque on the summit now commemorates this ascent.
Posted by Arborfield at 19:56