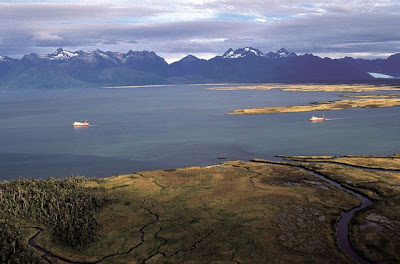 Chonos Archipelago
On the Monday I succeeded in reaching the summit (1600 ft. high); it was a laborious undertaking; the ascent being so steep as to make it necessary to use the trees like a ladder. (Note in margin: Great thickets of Fushza.) In these wild countries it gives much delight to reach the summit of any high hill; there is an indefinite expectation of meeting something very strange, which however often it is baulked, never with me failed to recur.— Every one must know the feeling of triumph or pride which a great & extensive view from a height communicates to the mind. — In this case there is joined to it a little vanity of distinction, that you perhaps are the first man who ever stood on this pinnacle, or admired this view. — There is always a strong desire to ascertain whether any body has previously visited the place where one may happen to be. — A bit of wood with a nail in it is picked up & studied as if it was covered with hieroglyphics. Owing to this feeling, I was much interested by finding on a wild piece of the coast, a bed made of grass, beneath a ledge of rock; close by it there had been a fire, & the man had used an axe. — The fire, bed & situation were chosen with the dexterity of an Indian, but it could scarcely be an Indian. — We subsequently found traces of a sealing vessel having been in here; yet I cannot help having some misgivings that the solitary man who had made his bed on this wild spot, was some poor shipwrecked sailor, trying to travel up the coast. If so, probably before this, he has laid himself down & died.
Posted by Arborfield at 10:27