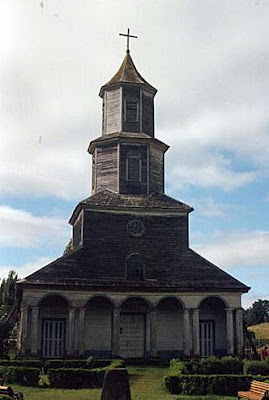 Chonos Archipelago
Don Pedro procured us fresh horses & offered himself to accompany us. We proceeded to the South, generally following the coast. We passed through several hamlets, each with its large barn-like chapel built of wood. — Near Castro we saw a remarkably pretty waterfall: it was very small: but the water fell in a single sheet into a large circular basin; around which stately trees from 100 to 120 feet high cast a dark shadow.
At Vilèpilli Don Pedro asked the Commandante to give us a guide to Cucao: The old gentleman offered to come himself; but for a long time he could not believe that anything could induce two Englishmen to go to such an out of the way place as Cucao. He repeatedly asked "but where are you really going?" & when Don Pedro answered to Cucao — He replied "a los infiernos, hombre; — what is the good of deceiving me?" — We thus were accompanied by the two greatest aristocrats in the country; as was plainly to be seen in the manner of all the poorer Indians. — But yet, it must not for a moment be imagined that either of these men had at all the air of a gentleman.
At Chonchi we struck off across the island and followed intricate winding paths, sometimes passing through magnificent forest & them opening into pretty cleared spots, abounding with corn & potatoe. crops. In this undulating woody country, partially cultivated, there was something which brought to mind the wilder parts of England, & hence to my eye wore a most fascinating aspect. — On the road we met a small herd of cattle which had just been collected at a "Rodeo"in the Pampas or Chili, where many hundreds are collected by a few men: here there were more men than cattle! — The cattle are hunted by dogs, which like our bull-dogs seize & hold them by the ears & nose, till men with lazos can come up & secure them. — At Vilinco, which is situated on the borders of the great lake of Cucao, only a few fields are cleared out of the forest, & the inhabitants appear all Indian. — This lake is twelve miles long & runs in an East & West direction: from local circumstances, the sea breeze blows very regularly during the day & during the night it falls calm. — This has given rise to strange exaggerations; for the phenomenon as described to us at S. Carlos was quite a prodigy.
The road to Cucao was so very bad, that we determined to embark in a periagua. The Commandante in the most authoritative manner ordered six Indians to get ready to paddle us over & without deigning to tell them whether they would be paid. The periagua is a strange roughboat, but the crew were still stranger: I do not think six uglier little men ever were in a boat together. — They pulled however very well & cheerfully; the stroke oar gabbled Indian & uttered strange crys, much after the fashion a pig-driver drives pigs. — We started with a light breeze against us, but yet reached after night fall the Capella de Cucao; having pulled at the rate of three miles an hour.— The country on each side of the lake is one unbroken forest. In the same Periagua with us, a cow was embarked; it would seem a puzzle how to get a cow into a small boat, but the Indians managed it in a minute. They brought the cow along side the boat, & heeling the gunwale towards her, placed two oars under her belly & resting on the gunwale; with these levers they fairly tumbled the poor animal heels over head into the bottom of the boat. — At Cucao we found an uninhabited hovel (which is the residence of the Padre when he pays this Capella a visit) where lighting a fire, we cooked our supper & were very comfortable.
The district of Cucao is the only inhabited part on the whole West coast of Chiloe. It contains about thirty or forty Indians, who are scattered along four or five miles of the shore, and without a single Spanish resident. — They are very much secluded from the rest of Chiloe & have scarcely any sort of commerce, excepting sometimes a little oil which they get from seal blubber. They are pretty well dressed in clothes of their own manufacture, & they have plenty to eat. — They seemed however discontented, yet humble to a degree which it was quite painful to behold. The former feeling is I think chiefly to be attributed to the harsh & authoritative manner in which they are treated by their rulers. Our companions, although so very civil to us, behaved to the poor Indians as if they were slaves rather than free men. They ordered provisions, & the use of their horses, without ever condescending to say how much, or indeed if the owners should at all be paid.
Posted by Arborfield at 07:28