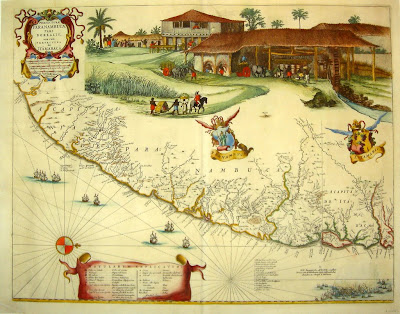 The weather having been unfavourable, we altered course & ran for Pernambuco. We anchored outside; but in a short time a pilot came on board & took us into the inner harbor, where we lay close to the town. Pernambuco is built on some narrow, low, sand banks, which are separated from each other by shoal channels of salt water. The three parts of the town are connected together by two long bridges, built on wooden piles. The town is in all parts disgusting, the streets narrow, ill-paved, filthy, the houses very tall & gloomy. The number of white people, which during the morning may be met with in the streets, appears to be about in the proportion of foreigners in any other nation; all the rest are black or of a dusky colour. The latter as well as the Brazilians are far from prepossessing in their appearance: the poor negroes, wherever they may be, are cheerful, talkative & boisterous. There was nothing in the sight, smell or sounds within this large town, which conveyed to me any pleasing impressions. The season of heavy rains scarcely had come to an end & hence the surrounding country, which is scarcely elevated about the level of the sea, was flooded with water. I failed in all my attempts to take any long walks. — I was however enabled to observe that many of the country houses in the outskirts were like those of Bahia, of a gay appearance which harmonized well with the luxuriant character of the tropical vegetation.
Syms Covington Journal
Anchored in the Roads of Pernambuco August 12th pm The same afternoon, went inside reef, or place where shipping lie, in fourteen feet of water.
Posted by Arborfield at 07:31