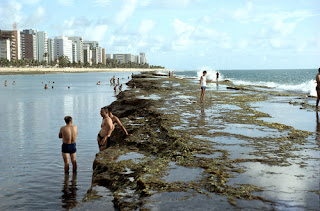 With respect to the origin of the reef, I believe, a bar composed of sand & pebbles formerly existed beneath the water, when the low land on which the town now stands was occupied by a large bay; & that this bar was first consolidated, & then elevated. These two distinct processes are of so common occurrence in S. America, that I now feel none of that surprise, with which such facts would formerly have startled me. There is another & slightly different explanation, which possesses equal probability, namely that a long spit of sand like some that now exist on the neighbouring coast, had its central part consolidated, & then by a slight change in the set of currents the loose matter was removed, the hard nucleus alone remaining. Although the swell of the open ocean breaks heavily on the outer side of the narrow & insignificant line of reef, yet there is no record of its decay. This durability is the most curious circumstance connected with its existence: it appears to be owing to a layer of calcareous matter, formed by the successive growth of several kinds of organic bodies, chiefly serpulae, balani, corallinae, but no true corals. It is a process strictly analogous to the formation of peat, & like that substance, its effects are to preserve from degradations the matter on which it rests. — In true coral reefs, when the upper extremities of the living mass are killed by the rays of the sun, they become enveloped & protected by a nearly similar process. It is probable that if a Breakwater such as that of Plymouth, was built in these tropical seas, it would be imperishable, that is, as imperishable as any part of the solid land, which all, some day, must suffer decay & renovation.
Note: The reef, which can be traced more or less distinctly along the Brazilian seaboard for several hundred miles, rises at Pernambuco into a perfectly straight artificial-looking wall, 31 miles long, with even sides and a smooth and almost level top from 30 to 60 yards in width. It is of a hard pale-coloured sandstone, breaking with a very smooth fracture ; and a tough layer of calcareous matter, generally several inches thick, produced by the successive growth and death of the small shells of Serpuhe with some few barnacles and nullipores, proves so effectual a protection of the outer surface that though it is exposed to the full force of the waves of the open Atlantic the oldest pilots know of no tradition of change in its appearance. The belt of water within the reef is about a mile in width and forms a safe but rather shallow harbour ; vessels drawing 191 feet can enter, and there is abundant room for mooring along the shore.


[Image: A modern photo of the reef at low tide]
Posted by Arborfield at 07:12