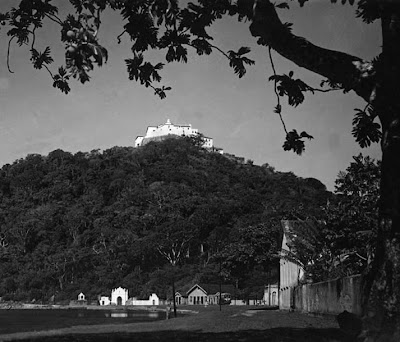 Rio de Janeiro
Rode with Mr Bolger to the chapel of Nossa Senhora de Penha; this being one of the sights of the country. — Our road lay through the North & back part of the city, which covers a much greater space than I had imagined. The suburbs are very filthy & are surrounded by marshes covered with the Mangrove; the tide occasionally flows into them, & is sufficient to cause a continual putrefaction of vegetable & animal matter, which is rendered very perceptible to the nose. — The land surrounding the Bay is generally thus situated for instance Macucu & in consequence unhealthy.
.
As we proceeded in this direction nothing could be more uninteresting than the country. — Nossa Senhora is a gay little chapel built on one of the naked rounded hills of gneiss so frequent in this country. — Some hundreds of steps lead to the summit & there is an extensive view of the harbor & its islands. — On our return we rode to the palace of St Christophe; at a distance, from its large & regular dimensions & from the bright colours of the walls, it has a grand appearance. — I was much struck by the beauty of the right hand side building; I did not expect to see any thing so elegant in the Brazils. — The gate, which the Duke of Northumberland sent as a copy of the one at Sion house, stands on the edge of a hill where there is no path; even under such circumstances it is highly ornamental.
Posted by Arborfield at 06:57