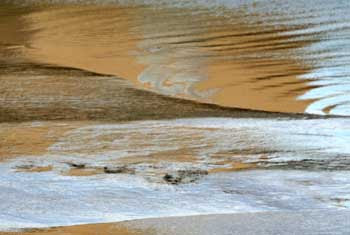 Port St Julian
Went up to the head of the Harbour, the boat being aground on a mud-bank, we were all obliged to launch for a half mile through mud & water & did not reach the vessel till late at night & very cold we all were. In the dark we were puzzled by seeing another ship, it turned out to be a French whaler, which in the morning came over the bar neck or nothing. The French Government gives a great bounty to all Whalers, I suppose to encourage a breed of good seamen; but from what we have seen of them, it will be a difficult task, all the officers are brought up in the English trade & it is curious to hear every word of command in their boats given in English.

Syms Covington’s Journal:
Port St. Julian is similar, I may say, in almost every respect, to Port Desire, except that there has been no settlement. Also, the cliffs are full of fossil shells.
Posted by Arborfield at 08:17