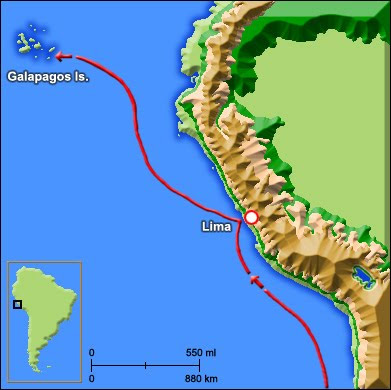 H.M.S. Blonde arrived with Capt. FitzRoy on board; he subsequently during the Beagle stay resided in Lima. — The country has continued in the same state of mis-rule; even the road between Lima & Callao has been infested with gangs of mounted robbers. — In consequence I have staid quietly on board. My occupation has been writing up Geological notes about Chili. — if the time had not been robbed either from England or the Pacifick it would have been pleasant; the consciousness of this, gave a longing to proceed. — I paid Lima two short visits; one day I went out with some Merchants, who have a few dogs to hunt deer with. — Our sport was very poor; but I had an opportunity of seeing the remains of one of the very numerous old Indian villages, with its hill-like mound in the centre. — The ruins in this plain of houses, enclosures, irrigating streams & burial mounds, give one a high idea of the ancient population. — When the Earthern ware is considered; the woollen clothes, the utensils, of elegant forms cut out of the hardest rocks, the tools of Copper & ornaments of the precious metals, it is clear they were considerably advanced in civilization. — The burial mounds (called "Huacas") are really stupendous works; in some places, however, a natural hill appears only to be artificially encased & modelled. — Another & very different class of ruins possesses some interest, namely those of old Callao, which was destroyed by the great Earthquake of 1747. — The state of ruin is much more complete than that of Concepcion; quantities of shingle almost conceal the foundations of the walls. It is believed the Land at the time subsided: I found some curious geological facts, which are only explicable by a similar movement but at a very remote period, when the country stood at a less elevation by 100 ft & yet was inhabited by Indians. I do not think there is any place which the Beagle has visited, of which I have seen so little; so I will write no more.

Captain Fitzroy’s Journal
On the 9th of August, the Blonde anchored in Callao Bay, and I enjoyed the satisfaction of finding all well on board the Beagle. She had touched at Copiapó and Iquique, for Mr. Darwin, in her way to Callao, where she arrived on the 19th of July. Lieutenant Sulivan brought his little vessel safely to an anchor near the Beagle on the 30th, having accomplished his survey in a very satisfactory manner. So well did he speak of the Constitucion, as a handy craft and good sea boat, and so correctly did his own work in her appear to have been executed, that after some days' consideration I decided to buy her, and at once set on foot an examination of the coast of Peru, similar to that which Mr. Sulivan had completed of the coast of Chile. Don Francisco Vascuñan had authorized the sale of his vessel at Callao: she was purchased by me for £400, and immediately fitted out afresh.

I could not spare Lieutenant Sulivan to remain on the coast of Peru, while the Beagle would be crossing the Pacific, on her return to England by way of the Cape of Good Hope; but there was Mr. Usborne, able and willing to undertake the task, who, from his station, could be spared without prejudice to the duties yet remaining to be executed on board the Beagle, and a better man for the purpose I could not have desired. With him Mr. Forsyth volunteered to go, and Commodore Mason was prevailed upon to allow Mr. E. Davis, a master's assistant of the Blonde, to join the little expedition; who, with seven good seamen, and a boy, volunteers from the Beagle, completed Mr. Usborne's party.

A stranger might well smile at the idea of such a boat affair being started to survey, in eight or at most ten months, the whole coast of Peru, from Paposo, near Atacama, to the River Guayaquil; but the task was completed; the charts are now engraved; and very soon seamen will be able to test their accuracy.

Most people are aware that the coast of Peru is free from storms; that the wind blows moderately along the land or from it; and that there is little or no rain. Consequently, as the sea is seldom much disturbed (except by a south-west swell), and there are neither 'races' nor dangerous streams of tide, an open boat might undertake such a task, if safety alone were to be considered, provided that she did not try to land in a surf. The real impediments to surveying that coast are—the surf caused on those steep rocky shores by an occasional heavy swell, almost amounting to rollers, from the south-westward; the delays and doubts created by prevalent fogs; and the loss of positions, as well as time, consequent upon being drifted by currents during a calm. Mr. Usborne had also to prepare for, and provide against, as much as possible, difficulties of a very different nature—those arising out of the disturbed state of that country—the anarchical internal dissensions which are the bane of all South America, but especially of Peru. In this respect there were so many prospective dangers, as well as difficulties, that I should not have ventured to let him encounter them, had we not had such a man as Belford Hinton Wilson to rely upon for foresight, advice, influence, and as hearty unflinching assistance, as any one public servant could afford to another. Mr. Wilson's exertions were unceasing, until he procured every passport and document that could by any possibility be required for Mr. Usborne. He introduced him as well as myself, to the hydrographer (Don Eduardo Carrasco) who assisted us in many ways most materially; and after I left the coast he showed every possible attention and kindness to all the Constitucion's party; winding up by advancing a large sum of money out of his own purse, to forward the service in which they were engaged, and increase their comfort during a long passage to England round Cape Horn.

Captain Carrasco, formerly in the Spanish navy, and now Director of the Nautical School at Lima, gave me, and afterwards Mr. Usborne, every particle of information which he and I thought might be useful—both verbally and in writing—besides which he ransacked the archives for manuscripts, charts, and books, from which he allowed extracts to be taken or copies made, in the most truly liberal manner; and I long to see the results of our voyage, whatever they may be, laid before him and his friends, as an acknowledgment—however slight—of their free assistance and co-operation.
Posted by Arborfield at 08:01