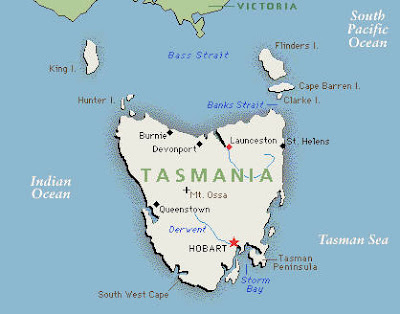 Tasmania
During these days I took some long pleasant walks examining the geology of the country. The climate here is damper than in New S. Wales & hence the land is more fertile. Agriculture here flourishes; the cultivated fields looked very well & the gardens abounded with the most luxuriant vegetables & fruit trees. Some of the farm houses, situated in retired spots, had a very tempting appearance. The general aspect of the Vegetation is similar to that of Australia; perhaps it is a little more green & cheerful & the pasture between the trees rather more abundant. — One long walk which I took was on the opposite side of the Bay; I crossed in a Steam boat, two of which are constantly plying backwards & forwards. The machinery of one [of] these vessels was entirely manufactured in this Colony, which from its very foundation only numbers three & thirty years!
Captain Fitzroy’s Journal
During a few days' stay in Sullivan Cove, the chief anchorage, we had opportunities of going to some distance into the country, and seeing things which led me to think that there is a more solid foundation for future prosperity in Van Diemen's Land than can be found near Sydney. Natural advantages are greater; and likely to increase as the country is cleared and inhabited — because rain is now almost too plentiful, though corn ripens well and is of excellent quality. As a convict colony, it of course partakes of the evils I have mentioned; but it does so in a far less degree, partly because the convicts sent there were of a less profligate and more reclaimable class than those landed at Sydney, and partly because an excellent local government restrained the licentious, and encouraged the moral to a far greater extent than was, or perhaps could be effected among the more numerous and dispersed population of Sydney and its environs.
Posted by Arborfield at 08:04