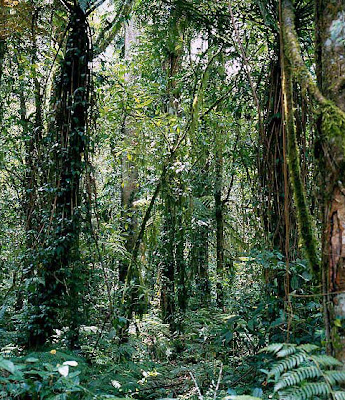 Rio de Janeiro
Rode to the place where I was the other day hunting with the Padre; having put up my horse, I started for the woods. — A mulatto & a little Brazilian boy accompanied me; — the latter was quite a child, but dressed in the same manner as I described the eldest son. — I never saw anything at all equal to his power of perception. — Many of the rarest animals in the most obscure trails were caught by him. — I should have as soon expected a beetle to have turned traitor & been my coadjutor, as to have found so able a one in this little fellow. — It really was like what one reads of the talent of observation which the Indians possess, my eyes with years of practice were not at all on a par with this childs. — I wish the Brazilians, as they advance in age, could keep the pleasant & engaging manners which they possess in youth. — My companions left me & I proceeded on my scramble into the interior of the forest. — A profound gloom reigns everywhere; it would be impossible to tell the sun was shining, if it was not for an occasional gleam of light shooting, as it were through a shutter, on the ground beneath; & that the tops of the more lofty trees are brightly illuminated. — The air is motionless & has a peculiar chilling dampness. — Whilst seated on the trunk of a decaying tree amidst such scenes, one feels an inexpressible delight. — The rippling of some little brook, the tap of a Woodpecker, or scream of some more distant bird, by the distinctness with which it is heard, brings the conviction how still the rest of Nature is. — I returned to the house; where I found several people collected after dinner; this day being one of their numerous feast-days. — The many contrivances for catching animals which my large pockets (not the least subject for surprise) contained, afforded ample grounds for curiosity & wonder. In both of which, with a great deal of good-nature they most freely indulged. — They assuredly thought me a greater curiosity than anything their woods contained. —
Posted by Arborfield at 07:00