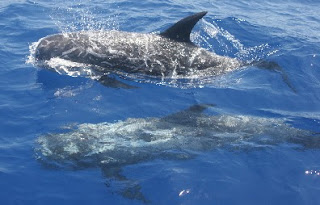 Risso's dolphin (Grampus griseus) !
Bahia to Rio de Janeiro
All hands employed in making April fools. At midnight almost nearly all the watch below was called up in their shirts; carpenters for a leak: quarter masters that a mast was sprung, midshipmen to reef top-sails. All turned in to their hammocks again, some growling some laughing. The hook was much too easily baited for me not to be caught: Sullivan cried out, "Darwin, did you ever see a Grampus: Bear a hand then". I accordingly rushed out in a transport of Enthusiasm, and was received by a roar of laughter from the whole watch.
Posted by Arborfield at 17:50