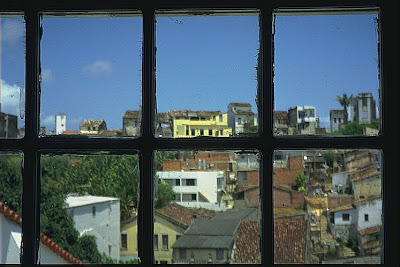 Bahia, Brazil
I am quite ashamed at the very little I have done during these two days; a few insects & plants make up the sum total. — My only excuse is the torrents of rain, but I am afraid idleness is the true reason. — Yesterday Capt Paget dined with us & made himself very amusing by detailing some of the absurdities of naval etiquette. — To day Rowlett & myself went to the city & he performed the part of Cicerone to me. — in the lower part near to the wharfs, the streets are very narrow & the houses even more lofty than in the old town of Edinburgh, the smell is very strong & disagreeable, which is not to be wondered at, since I observe they have the same need of crying "gardez l'eau" as in Auld Reekie. — All the labor is done by the black men, who stand collected in great numbers round the merchants warehouses. — The discussions which arise about the amount of hire are very animated; the negros at all times use much gesticulation & clamor & when staggering under their heavy burthens, beat time & cheer themselves by a rude song. — I only saw one wheel carriage; but the horses are by no means scarce; they are generally small & well shaped & are chiefly used for the merchants to ride. — We paid a visit to one of the principal churches, we here found for a guide, a little Irish boy about 13 years old. — His father was buried there two months ago, & was one of the unfortunate people whom Don Pedro enticed into the country under the pretence of settling them. — This little fellow contrives to support his mother & sister by the few Vintems which in the course of the day he earns by messages. — Mr Gond, one of the principal merchants in the place, offered to lend us horses, if we would walk to his country house. — We gladly accepted his offer & enjoyed a most delightful ride; one beautiful view after another opening upon us in endless succession.
Posted by Arborfield at 07:52

Wondering if 'Mr. Gond' is mis-transcribed and could be read as Mr. Youds. John Youds was a merchant and ship's chandler in Bahia at the time.
Where could one get a scan of the original handwriting?