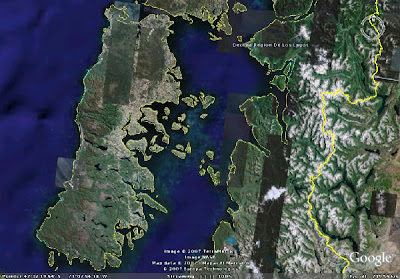 Chiloe
Arrived in the harbor of S. Carlos. Considering the time of year, with almost constant Southerly winds, our passage was a pretty good one. — The island wore quite a pleasing aspect, with the sun shining brightly on the patches of cleared ground & dusky green woods. At night however we were convinced that it was Chiloe, by torrents of rain & a gale of wind.

Captain Fitzroy’s Journal:
On the 21st we arrived at San Carlos, and were pleased to find that Mr. Low had returned safe from his difficult undertaking; and that a person (Mr. Douglas) whom I had engaged to make an excursion to Calbuce and into the forests of 'Alerse,' on the Cordillera of the Andes, had also come back with the required information, and was ready to engage himself to act as a pilot and interpreter.
Posted by Arborfield at 07:20