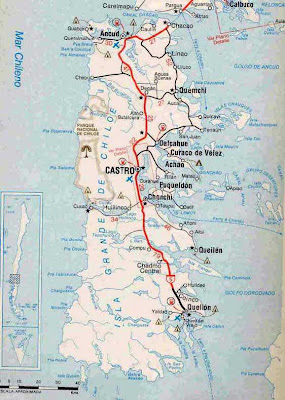 Chiloe
We reached on the Sunday morning Castro, the ancient capital of Chiloe. I never saw before so truly a deserted city. The usual quadrangular arrangement of Spanish towns was to be traced, but the streets & Plaza were coated with fine green turf on which Sheep were browzing. A church, built by that all-powerful order of the Jesuits shortly before their expulsion, is highly picturesque; (Note in margin: It is not the Jesuits Church but the Parochial one.) it is entirely built of plank, even to the roof: it seems wonderful that wood should last for half a century in so wet a climate. The arrival of our boats was a rare event in this quiet retired corner of the world, nearly all the inhabitants came to the beach to see us pitch our tents. They were very civil & offered us a house; & one man even sent us a cask of cyder as a present. In the afternoon we paid our respects to the Governor; a quiet old man, who in his appearance & manner of life was scarcely superior to an English cottager. I afterwards went out riding, to examine the geology of the neighbourhead. The country rises to some height behind the town, it is partly cultivated & pleasant looking. At night rain commenced, which was hardly sufficient to drive away from the tents the large circle of lookers on. An Indian family, who had come to trade in a canoe from Caylen, bivouacked near us: & they had no shelter during the heavy rain: in the morning I asked a young Indian, who was wet to the skin, how he passed the night; — he seemed perfectly content & answered "Muy bien Signor".
Posted by Arborfield at 21:30