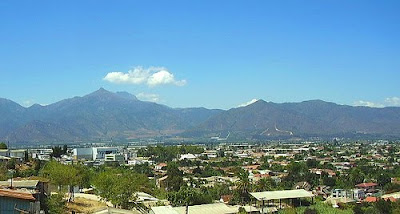 Limache to Quillota
Passed Limache & Umirì, villages in one of the broad, level & fertile valleys & lodged at a cottage at the South foot of the Bell Mountain. It has been discovered on board the Beagle by angular measurements that the hill is 6200 ft. high; as there are others of the same & many of little less height, it will be evident how truly an Alpine country Chili is. The Volcano of Aconcagua, the magnificent appearance of which I have so often admired in this journal, actually attains the enormous height of 23000 ft—!!! The inhabitants of the cottage were freeholders, which is not very common in Chili; they support themselves on the produce of a garden & little field, but are very poor. — So deficient is Capital, that they are obliged to sell their green corn when standing in the field, in order to buy necessaries; wheat is in consequence dearer here in the very district where it is produced, than in the town of Valparaiso where the Contractors live. — Having failed in my geological pursuit, I took the road for Quillota, which we reached by the middle of the day.
Posted by Arborfield at 14:26