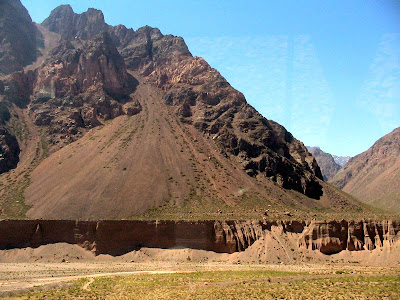 Mendoza to Santiago (Day 17) – Rio de las Vacas
In the morning when we arose, we had much difficulty in saddling the mules owing to a gale of wind, this brought such clouds of dust that we soon were convinced the name was properly applied. — In the evening we reached the R. de las Vacas, which is about the worst stream in the Cordilleras; it was deemed prudent to take up our nights lodging on the side. As all the water in the rivers proceeds from the melted snow, & the course being short & rapid, the hour of day makes a considerable difference in the difficulty of crossing, in the evening the stream is muddy & full, about an hour after day-break it is both both clearer & much less impetuous. And this we found to be the case on the ensuing morning.
The scenery during the whole of the ascent is very uninteresting as compared to the pass of the Portillo, little can be seen beyond the grand valley with its broad base which the road follows up to the very crest of the chain. It is moreover very sterile; during this & the previous night the poor mules had eaten nothing. Besides a few low resinous bushes, there are very few plants.

During the last day we have crossed some of the worst passes in the Cordilleras. I have been quite surprised at the degree of exaggeration concerning the danger & difficulty. These are not only Travellers tales, for I was told in Chili that if I attempted to pass on foot my head would turn giddy, that there was no room to dismount &c &c. Now I did not see a place which I would not walk backwards over & get off on either side of my mule. One of the bad passes, called Las Animas (the Souls), I had crossed, & did not find out till a day afterwards that it was one of the awful dangers. — No doubt in very many places if the Mule should fall you would be hurled down an enormous precipice; in a like manner if a Sailor falls from aloft, it is probable he will break his neck; (& by the latter way many more in proportion have lost their lives). — I daresay in the Spring time, the Laderas or roads which each year are formed anew across the piles of fallen detritus, are much worse; but from what I have seen I believe the real danger is nothing, & the apparent very little. With Cargo mules the case is rather different, the loads project so far beyond the animals sides that they occassionally run against another mule or overhanging point, & losing their balance are lost. — With respect to the rivers, I can well believe the difficulty amounts to every degree till it is impossible to cross them. In the Autumn, at this season, there is no trouble, but in the summer they must be very bad. I can quite imagine what Capt Head describes, the different expression of countenance of these who have passed & those who are passing these torrents. I never heard of any man being drowned, but of plenty of Cargo mules. The Arriero tells you to show your mule the best line & then allow her to take her own manner in crossing. The Cargo mule takes a bad line & then with its great load is lost.
Posted by Arborfield at 07:17