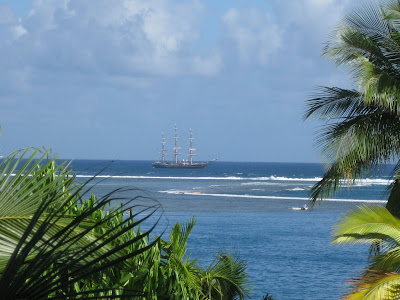 Tahiti
The Beagle returned to her old quarters at Matavai. — in the evening I took a pleasant ramble on shore.

Captain Fitzroy’s Journal
I went to see 'Ua,' an old man, who remembered 'Toote' (Cook); yet was still strong and active: he told me that in those days he was a little boy. There were many more people then in Otaheite; ten to one, as compared with the present numbers: but sickness had destroyed a great many, he thought. The island was not so healthy as in former times; and they had caught diseases, in those days unknown. Asking who brought this or that disease, he imputed the worst to the ships which came after Cook's first visit, and left men upon the island until their return the following year.* Curvature of the spine, or a hump-back, never appeared until after Cook's visits; and as he had a hump-backed man in his ship, they attribute that deformity to him. 'Ua' told me that I need not yet have any anxiety about a westerly wind, or bad weather. "The wind would be light and variable during that day, but on the morrow would draw round to the eastward, and two days afterwards the sky would be nearly free from clouds."

Thanking the old man with some presents, I returned on board; and the Beagle then got under weigh, 'swept' out of the harbour, and, by the sails and sweeps, alternately employed, regained her former anchorage in Matavai Bay. In the course of a walk among the cottages between Papawa and Matavai, I found numerous tokens of industry, such as I had not expected in a South Sea island. In an enervating climate, where abundance of food is easily procured, one ought not to expect the contented natives to distress their minds or bodies, with anxious and industrious endeavours to supply wants which they do not feel, in any degree like the inhabitants of cold or temperate climates; yet the men of Otaheite undergo great fatigue, and carry heavy burthens up and down most difficult tracks in the mountains, in a manner astonishing, if not impossible, to Europeans. Mr. Darwin, who made a three days' excursion among the wildest parts of the mountains, was quite enthusiastic in his account of the strength, activity, and above all, the excellent disposition and good conduct of the two natives who were his companions and guides.

At the door of one house I saw the owner reading a book attentively. It was the New Testament translated into his native language. His wife was rolling up some of the large green leaves which they use as substitutes for plates; and two merry little children had been running after me, singing, in hopes of a present of some trifle. The superior expression of that man's countenance, and his unaffected employment (for I came upon him suddenly, and unperceived till the children spoke), made an impression upon my mind, which, I hope, will not be forgotten.

In my way back, passing some tall palm trees, I asked a native to get me some cocoa-nuts. Putting a strip of bark between his feet, he threw off his shirt, and jumped 'at' the tree, catching the trunk with his feet and hands at the same moment; then moving his hands alternately, and his feet by short jumps, the band of bark assisting their hold on the slender trunk, in a few seconds he was at the top of a tree seventy feet in height, quite straight and perpendicular, and tapering in size from a foot to six inches in diameter.

Some curious relics of former times were found for me, which had long remained in dusty quiet; among them were tortoise-shell masks, and head pieces surmounted by feathers of the tropic bird; also an apron, ingeniously, or rather laboriously made of small pieces of mother of pearl. So long was it since they had been used, that a native about thirty years of age did not know what they were for: but from the signs and expressions of the old man to whom they belonged, I think they formed part of the dress of a priest, used when sacrificing a (perhaps human) victim. Two English sixpences also found their way to me, bearing the date 1787; memorials of the ill-fated Bounty.

News arrived that the queen intended to return to her headquarters at Papiete, and that she had ordered a present of fruit and pigs to be prepared.

* "Mr. Thomas Falkner was the son of a surgeon of eminence at Manchester, and was brought up in his father's profession, for which he always manifested the most promising disposition. To complete his professional studies, he was sent to London to attend St. Thomas's Hospital; and, happening to lodge in Tooley-street, on the Surrey bank of the Thames, he made an acquaintance with the master of a ship, employed in the Guinea trade, who persuaded the young surgeon to accompany him in his next voyage in his professional capacity. On his return to England, he engaged to go in the same situation on board a merchant ship to Cadiz, from which he continued his voyage to Buenos Ayres, a Spanish settlement on the River La Plata. Here he fell sick, and was in so dangerous a state when his ship was ready to depart, as not to be in a condition to be carried on board; so she sailed without him. The Jesuits, of which there was a college at Buenos Ayres, nursed him during his illness with the greatest care and kindest assiduity; and perceiving the very great advantage which they would derive, in their missions, from possessing a brother who was so well skilled in medicine and surgery, spared no pains to win his affection and secure his confidence. In short, they so worked upon his mind, as to persuade him to enter into their college, and finally to become one of their order. He now entered upon his ministry among the Indians who inhabit the vast track of country between the River La Plata and the Straits of Magellan. His skill in the cure of diseases, and in performing chirurgical operations, together with his knowledge of mechanics, rendered his mission successful beyond example. In this country he remained near forty years, and was among the persons appointed by the Spanish government to make a survey of the coasts between the Brazils and the Tierra del Fuego, Falkland Island, &c. When the society of Jesuits was dissolved, he was sent back to Spain, and after an absence of near forty years, arrived in his native country. Soon after his return to England he became domestic chaplain to Robert Berkeley, esquire, of Spetchley, near Worcester, a Roman Catholic gentleman of distinguished knowledge, most respectable character, and large fortune. There he wrote the account of Patagonia, which has been quoted in this volume, and was afterwards published, with a map corrected from that of D'Anville, according to his own observations. Mr. Falkner possessed a very acute mind, a general knowledge, and most retentive memory. Of his medical experience and practice, I have heard physicians of eminence speak in the highest terms of commendation. His manners, as may be supposed from the tenor of his life, were at once singular and inoffensive: and he retained somewhat of his Indian habits to the last. He died, as I have been informed, about the year 1781."