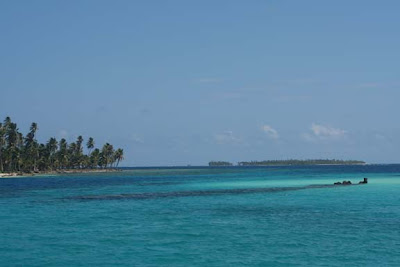 This day we saw the first Island which can be truly said to belong to Polynesia. It is called Dog or Doubtful lsd. — The latter name expressing all which was known about it. — As may be seen in the Charts, it is an outlier on the East side of the large group of the Low Isds. This in its structure however is not truly one of the Low Islands. — Its surface is raised considerably more than the average height from three to four ft. — otherwise in its level green surface, its apparently circular outline, in the detached rocks, or rather those which from the lowness of the sand beaches seem detached, there is a peculiar character, which may be understood by a drawing in Capt. Beecheys work. The insignificant patch of land bears no proportion & seems an intruder on the domain of the wide all-powerful ocean. — The proximity of this land was shown by the great & increased numbers of sea-birds, especially two species of Terns — To our great grief, the rainy season appears to have commenced; during the last four days, the sky has been very gloomy, with thunder, lightning, squalls of wind & heavy rain. From the extreme humidity of the Atmosphere the heat is rather oppressive. — The Thermometer in the Poop cabin remains constantly from 80°-83 degrees. — The air being thick & misty & the night dark, for the first time it has not been thought prudent to run on. So that we are now hove to, wasting the precious time till daylight comes & shows us the dangers of our course.
Captain Fitzroy’s Journal
On the 9th we saw Honden Island (Dog Island, ed.), one of the low coral formations, only a few feet above water, yet thickly covered with cocoa-nut trees. Our observations corroborated the position assigned to it by Admiral Krusenstern, in his excellent chart and memoir, the only documents of any use to us while traversing the archipelago of the Low Islands. This archipelago is indeed extremely deserving of its appellation, 'Dangerous;' for numerous coral islets, all low, and some extensive, obstruct the navigation, while unknown currents and strong squalls, and a total want of soundings, add to the risk of sailing there at night. Singular interruptions to the trade-wind are caused by these low lagoon islands; not only does the easterly wind often fail among them, but heavy squalls come from the opposite direction, and more frequently by night than by day. This is especially the case from November to March.

I have before remarked, that extensive shallows, such as the Abrolhos and Bermudas, are liable to heavy squalls; and so far as I have heard or observed, it is usually the case that on land, a wide tract of flat country, without hills, or at sea, a considerable space of partly-covered ground, nowhere rising much above high-water, is subject to more frequent and violent blasts of wind than mountainous or even hilly regions, whether continental or island.

Clouds are certainly attracted, even if their formation be not hastened, by land; especially when it is covered by trees: and as low islands (such as those of the Dangerous Archipelago, between 14° and 20° south) have no hill or height of any kind, about which clouds attracted by the archipelago (taken together) can gather and discharge a portion of their contents, electrical as well as fluid, it may, I think, be inferred, that the want of such a conductor as would be furnished by a mountain five or six thousand feet high, is the reason why clouds in various electrical conditions unite or oppose one another, as the case may be; and, in consequence, cause rapid changes in the atmosphere around them; of which the effects are seen in squalls (sometimes with heavy rain, sometimes without), and even in whirlwinds. Where high land acts as a conductor between the earth and certain portions of our atmosphere, there may be a continual, though unperceived, electrical action. In connection with this subject I would, if I were able, consider the effects of rapidly varying temperature over land, and comparatively uniform temperature over ocean during twenty-four hours; which latter fact I might suspect to be one reason why the great Humboldt could not discover any particular electrical action, as indicated by his electrometers, while sailing from Europe to Brazil: although those same instruments were far from inactive after he landed. But I feel myself out of my depth, and will leave such speculations to those who are qualified to indulge in them.
Posted by Arborfield at 07:39