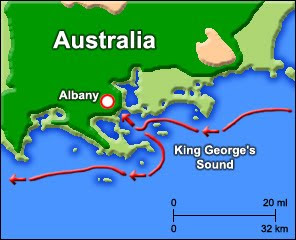 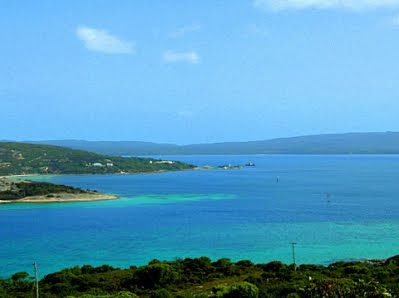 King George's Sound (Western Australia)
In the evening came to an anchor in the mouth of the inner harbor of King Georges Sound. Our passage has been a tolerable one; & what is surprising, we had not a single encounter with a gale of wind. — Yet to me, from the long Westerly swell, the time has passed with no little misery. We staid there eight days & I do not remember since leaving England having passed a more dull, uninteresting time. The country viewed from an eminence, appears a woody plain, with here & there rounded & partly bare hills of granite. — One day I went out with a party in hopes of seeing a Kangaroo hunt, & so walked over a good many miles of country. — Every where we found the soil sandy & very poor; it either supported a coarse vegetation of thin low brushwood & wiry grass, or a forest of stunted trees. — The scenery resembled the elevated sandstone platform of the Blue Mountains: the Casuarina (a tree which somewhat resembles a Scotch fir) is however in greater proportion as the eucalyptus is rather less. In the open parts there are great numbers of the grass-tree, a plant which in appearance has some affinity with the palm, but instead of the crown of noble leaves, it can boast merely of a tuft of coarse grass. The general bright green color of the brushwood & other plants viewed from a distance seems to bespeak fertility; a single walk will however quite dispel such an illusion; & if he thinks like me, he wilI never wish to walk again in so uninviting a country.

Captain Fitzroy’s Journal
We made the land off King George Sound on the 6th of March; and a few hours afterwards moored in the principal anchorage, called Princess Royal Harbour; a wide but shallow place, with a very narrow entrance. The country round King George Sound has a dull, uniform aspect; there are no mountains or rivers; few trees are visible; white, sandy patches; scrubby bushes; bare masses of granite; and a slightly undulating outline meet and disappoint the eye of a stranger.

A few straggling houses, ill-placed in an exposed, cheerless situation, were seen by us as we entered the harbour; and had inclination been our guide, instead of duty, I certainly should have felt much disposed to 'put the helm up,' and make all sail away from such an uninviting place.

Syms Covington Journal
Anchored in King George Sound; three islands ARE in the mouth of the entrance, with a flat on each side, which makes it narrow. The settlement is small AND very scattered. This colony belongs to New South Wales; Sir Richard Spencer IS the present Governor. The country at large IS sterile and very sandy, yet a few potatoes, pumpkins, etc. grown; salt provisions are used here, except when the kangaroo and wolwar can be caught, the latter very small. Kangaroo flesh sold at eight pence per pound. Great numbers of Indians here and the most miserable and meagre set of beings I have yet seen. No tattooing among natives, but gashes with sharp stones, knives etc., which they inflict on themselves, (on their breasts), said to be done out of bravado, to see which can stand the most pain without crying out.
Posted by Arborfield at 07:44