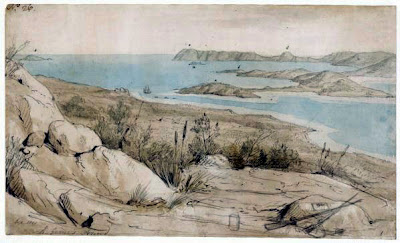 King George's Sound
The settlement consist of from 30–40 small white washed cottages, which are scattered on the side of a bank & along a white sea beach. — There are a very few small gardens; with these exceptions all the land remains in the state of Nature & hence the town has an uncomfortable appearance. — At the distance of a mile over the hill, Sir R. Spencer has a small & nice farm, & which is the only cultivated ground in the district. The inhabitants live on salted meat & of course have no fresh meat or vegetables to sell; they do not even take the trouble to catch the fish with which the bay abounds: indeed I cannot make out what they are or intend doing. — I understand & believe it is true, that thirty miles inland there is excellent land for all purposes; this is already granted into allotments & will soon be under cultivation. The settlement of King George's Sound will ultimately be the Sea port of this inland district.
Certainly I have formed a very low opinion of the place; it must however be remembered that only from two to three years have elapsed since its effectual colonization, & for this great allowances must be made. Whether, however, it will ever be able to compete with the Colonies which possess the cheap labor of convicts, time alone will show. — They possess here some advantages, the climate is very pleasant, & more rain falls than in the Eastern colonies. I judge of this from the fact that all the broad flat bottomed valleys which are covered over with the rush-like grasses & brushwood, are in winter so swampy as scarcely to be passable.
The second grand advantage is the good disposition of the aboriginal blacks; it is not easy to imagine a more truly good natured & good humoured expression than their faces show: Moreover they are quite willing to work & to make themselves very useful; in this respect they are very different from those in the other Australian colonies. — In their habits, manners, instruments & general appearance they resemble the natives of New S. Wales. — Like them, they are very remarkable by the extreme slightness of their limbs, especially their legs; yet without, as it would appear, muscles to move their legs, they will carry a burthen for a longer time than most white men. — Their faces are very ugly, the beard is curly & not at all deficient, the skin of the whole body is very hairy & their persons most abominably filthy. Although true Savages, it is impossible not to feel an inclination to like such quiet good-natured men.

Captain Fitzroy’s Journal
Next day, however, we found that appearances were worse than the reality; for behind a hill, which separates the harbour from the sound, a thick wood was discovered, where there were many trees of considerable size; and in the midst of this wood I found Sir Richard Spencer's house, much resembling a small but comfortable farm-house in England. This sort of isolated residence has a charm for some minds; but the loss of society, the numerous privations, and the vastly retrograde step necessarily taken in civilized existence by emigrating to perfectly new countries, are I think stronger objections to the plan than usually occur to persons who have not seen its consequences in actual operation.

At this time there were about thirty houses, or cottages, in the neighbourhood of the sound and harbour; some had small gardens; but, generally speaking, there was no appearance of agriculture, excepting immediately around Sir Richard's house, where a few fields had been cleared and cultivated in the midst of the wood.

There is an extraordinary degree of local magnetic attraction about this place. We could not ascertain the amount of variation with any degree of accuracy until our compasses were placed upon a sandy beach of considerable extent, near the sea. Wherever there was stone (a kind of granite) near the instruments, they were so much affected as to vary many degrees from the truth, and quite irregularly: those on board were not influenced, at least not more than a degree. We were also perplexed by the irregular and peculiar tides; but as they are mentioned elsewhere, I will refrain from farther remark on them here.
Posted by Arborfield at 12:01