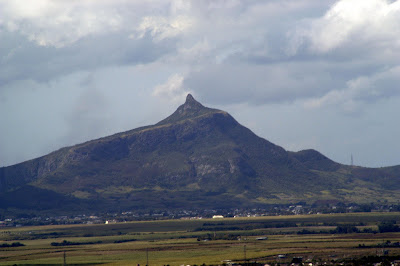 I took a quiet walk along the sea coast to the north of the town; the plain is there quite uncultivated, consisting of a field of black lava smoothed over with coarse grass & bushes, the greater part of which are mimosas. Capt. FitzRoy before arriving here said he expected the island would have a character intermediate between the Galapagos & Tahiti. This is a very exact comparison, but it will convey a definite idea to a very few excepting those on board the Beagle. It is a very pleasant country, but it has not the charms of Tahiti or the grandeur of a Brazilian landscape.
The next day I ascended La Pouce, a mountain so called from a thumb like projection, which rises close behind the town to a height of 2600 feet. M. Lesson in the voyage of the Coquille has stated that the central plain of the Island appeared like the basin of a grand crater, & that La Pouce & the other mountains once formed parts of a connected wall; thus it likewise appeared to me.1 From our elevated position, we enjoyed an excellent view over this great mass of volcanic matter: the country on this side of the island appears pretty well cultivated, the whole being divided into fields & studded with farmhouses. I am, however, assured that of the whole land not more than a half is yet in a productive state; if such is the case & considering the present great export of sugar, at some period this island when thickly peopled, will be of very great value. Since England took possession, which is only twenty five years ago, the export of sugar is said to have increased in the proportion of seventy five to one. — One great cause of this prosperity is due to the excellent roads & means of communication throughout the island. At the present day in the neighbouring island of Bourbon under the French Government, the roads are in the same miserable order as they were only a few years past in this place. The Macadamizing art has perhaps been of greater advantage to the colonies, even than to the parent country. Although the French residents must have largely profited by the increased prosperity of their island, yet the English government is far from popular. It seems unfortunate that among the higher order of French & English there appears to exist scarcely any intercourse.
Posted by Arborfield at 08:37