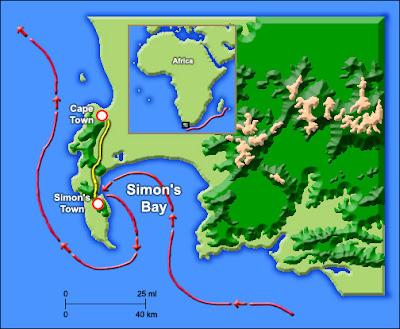 In the evening came to an anchor in Simon's Bay. — In the early part of the passage we passed in sight of the south end of Madagascar; we subsequently made the coast of Africa at Natal, & from that part coasted along a considerable length of the southern shores. We lost a week near Cape Lagullas by contrary winds & a severe gale. — The little town of Simon's Bay offers but a cheerless aspect to the stranger. About a couple of hundred square whitewashed houses, with very few gardens & scarcely a single tree, are scattered along the beach at the foot of a lofty, steep, bare wall of horizontally stratified sandstone.
Captain Fitzroy’s Journal
Anchored in Simon's Bay, at the Cape of Good Hope, on the 31st.
Posted by Arborfield at 07:46