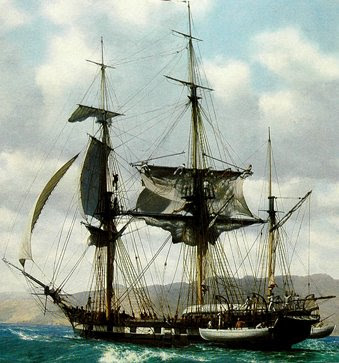 S. Cruz to Port Famine
We put to sea; & steered in search of an alleged rock (the L'aigle) between the Falklands & mouth of Straits of Magellan; after an unsuccessful hunt, we anchored on the 16th off C. Virgins.

Captain Fitzroy’s Journal:
We were detained for a day or two by an overcast sky, which prevented my obtaining equal altitudes; but on the 12th the Beagle left the Santa Cruz, and stood towards the alleged place of the shoal, or rock, called 'Aigle,' not far from the westernmost of the Falkland Islands. No such danger, nor any sign of shallow water being found, but, on the contrary, no bottom with one hundred fathoms of line, we steered towards Magalhaens Strait.
Posted by Arborfield at 08:37