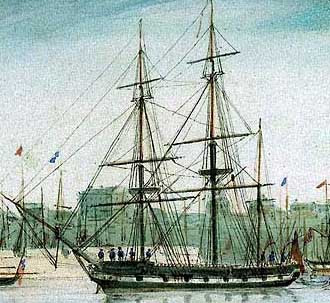 R. Santa Cruz
We arrived on board a little after noon; found the Beagle with her masts up, fresh painted & as gay as a frigate.

Almost every one is discontented with this expedition; much hard work, & much time lost & scarcely any thing seen or gained. We have however to thank our good fortune, in enjoying constant fine dry weather & blue skies. To me the cruise has been most satisfactory, from affording so excellent a section of the great modern formation of Patagonia.

Captain Fitzroy’s Journal:
Leaving a very small party near Weddell Bluff to look for guanacoes, I hastened on board with the boats; and with the ebb tide reached the Beagle before noon. The ship being ready for sea, excepting a ton or two of fresh water, the yawl and cutter were dispatched to get it and bring on board the shooting party. During my absence satisfactory observations on the tides had been made, which showed that the neap tides rise about eighteen feet, and the springs from thirty-eight to forty-two feet. One day when walking through a woody ravine, not far from the anchorage, Mr. Stewart saw a puma lying under a bush, glaring at him: taking a steady aim, he fired, and laid the animal dead. It was a very large one [the skin is now in the British Museum]. The moment of thus looking a lion in the face, while taking aim, at only a few yards distance, must be somewhat trying to the nerves, I should imagine. A beautiful wild cat was also added to our collections, besides condors and foxes.
Posted by Arborfield at 05:23