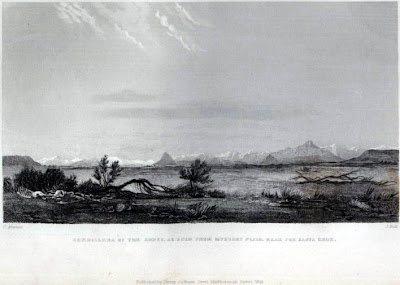 Captain Fitzroy’s Journal:
On the 3d, we found a more open country, the lava-capped heights receding gradually on each side, leaving a vale of flat, and apparently good land, from five to fifteen miles in extent. The width of the river increased; on its banks were swampy spaces, covered with herbage; and low earthy cliffs, without either shingle or lava, in some places bounded the river. A little further, however, the usual arid and stony plains of Patagonia were again seen, extending from the banks of the river to ranges of hills, about fourteen hundred feet above its level, on which the horizontal lava-capping could be distinctly discerned.
.
In the distant west the Cordillera of the Andes stretched along the horizon. During three days, we had advanced towards those far distant mountains, seeing them at times very distinctly; yet this morning our distance seemed nearly as great as on the day we first saw their snow-covered summits. A long day's work carried us beyond the flat and into the rising country, whose barren appearance I just now mentioned.
.
We were all very tired of the monotonous scene, as well as of the labour of hauling the boats along.
Posted by Arborfield at 07:49