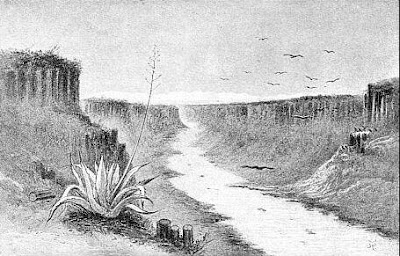 R. Santa Cruz
The river was here very tortuous, & in many parts there were great blocks of Slate & Granite, which in former periods of commotion have come from the Andes: Both these causes sadly interfered with our progress. We had however the satisfaction of seeing in full view the long North & South range of the Cordilleras. They form a lofty & imposing barrier to this flat country; many of the mountains were steep & pointed cones, & these were clothed with snow. We looked at them with regret, for it was evident we had not time to reach them; We were obliged to imagine their nature & grandeur, instead of standing, as we had hoped, on one of their pinnacles & looking down on the plains below. During these two days we saw signs of horses & several little articles belonging to the Indians, such as a bunch of Ostrich feathers, part of a mantle, a pointed stick. From a thong of cows hide being found; it is certain that these Indians must come from the North. They probably have no connection with those whose smoke we saw nearer to the Coast; but that during the Summer they travel along the foot Andes, in order to hunt in fresh country. The Guanaco being so excessively abundant I was at first much surprised that Indians did not constantly reside on the banks of this river; the cause of their not frequenting these plains must be their stony nature (the whole country is a shingle bed) which no unshod horse could withstand. Yet in two places, in this very central part, I found small piles of stones which I think could not have been accidentally grouped together. They were placed on projecting points, over the highest lava cliffs; & resembled those at Port Desire, but were on a smaller scale. They would not have been sufficient to have covered more than the bones of a man.

Captain Fitzroy’s Journal:
We had great difficulty with the boats on the 2d, the river being contracted in width, without any diminution of the body of water pouring down.
Posted by Arborfield at 08:14