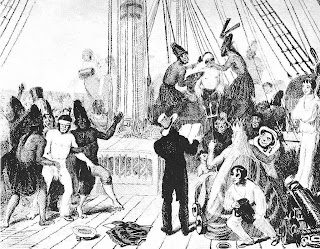 The Equator
We have crossed the Equator. I have undergone the disagreeable sensation operation of being shaved. About 9 oclock this morning we poor "griffins" two and thirty in number, were put altogether on the lower deck. The hatchways were battened down, so we were in the dark and very hot. Presently four of Neptunes constables came to us, and one by one led us up on deck. I was the first and escaped easily: I nevertheless found this watery ordeal sufficiently disagreeable. Before coming up, the constable blindfolded me and thus lead along, buckets of water were thundered all around; I was then placed on a plank, which could be easily tilted up into a large bath of water. They then lathered my face and mouth with pitch and paint, and scraped some of it off with a piece of roughened iron hoop, a signal being given I was tilted head over heels into the water, where two men received me and ducked me. At last, glad enough, I escaped, most of the others were treated much worse, dirty mixtures being put in their mouths and rubbed on their faces. The whole ship was a shower bath: and water was flying about in every direction: of course not one person, even the Captain, got clear of being wet through.
Posted by Arborfield at 08:48