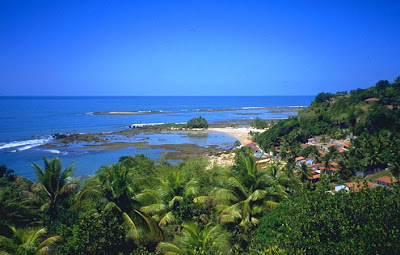 Bahia, Brazil
About 9 oclock we were near to the coast of Brazil; we saw a considerable extent of it, the whole line is rather low and irregular, and from the profusion of wood and verdure of a bright green colour. About 11 oclock we entered the bay of All Saints, on the Northern Side of which is situated the town of Bahia or St Salvador. It would be difficult [to] imagine, before seeing the view, anything so magnificent. It requires, however, the reality of nature to make it so — if faithfully represented in a picture, a feeling of distrust would be raised in the mind, as I think is the case in some of Martins pictures views. The town is fairly embosomed in a luxuriant wood and situated on a steep bank overlooks the calm waters of the great bay of All Saints.
The houses are white and lofty and from the windows being narrow and long have a very light and elegant appearance. Convents, Porticos and public buildings vary the uniformity of the houses: the bay is scattered over with large ships; in short the view is one of the finest in the Brazils. But their beauties are as nothing compared to the Vegetation; I believe from what I have seen Humboldts glorious descriptions are and will for ever be unparalleled: but even he with his dark blue skies and the rare union of poetry with science which he so strongly displays when writing on tropical scenery, with all this falls far short of the truth. The delight one experiences in such times bewilders the mind, if the eye attempts to follow the flight of a gaudy butter-fly, it is arrested by some strange tree or fruit; if watching an insect one forgets it in the stranger flower it is crawling over, if turning to admire the splendour of the scenery, the individual character of the foreground fixes the attention. The mind is a chaos of delight, out of which a world of future and more quiet pleasure will arise. I am at present fit only to read Humboldt; he like another Sun illumines everything I behold.
Posted by Arborfield at 07:26