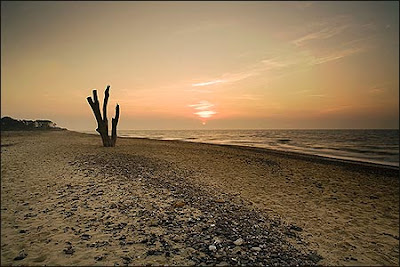 Bahia Blanca
Early in the morning the Captain with a large party landed in the four whale-boats. Dinner for all hands was taken, as it was intended to work at the land-mark all day & return in the evening. King & I went in one direction to geologize & Mr Bynoe in another to shoot. During our walk I observed the wind had freshened & altered its point; but I paid no further attention to it. When we returned to the beach, we found two of the boats hauled up high & dry & the others gone on board. The Captain two hours previously had had some difficulty in getting off & now the line of white breakers clearly showed the impossibility. It was an unpleasant prospect, to pass the night with thin clothes on the bare ground; but it was unavoidable, so we made the best of it. Mr Stokes & Johnson were left in command & made what arrangements they could. At night no supper was served out; as we were 18 on shore & very little food left. We made a sort of tent or screen with the boats sails & prepared to pass the night. It was very cold, but by all huddling in a heap, we managed pretty well till the rain began, & then we were sufficiently miserable.

Captain Robert Fitzroy:
I went with the Beagle towards Blanco Bay; completed the examination of a narrow though deep channel, by which any ship may enter Port Belgrano, passed round the great north bank, and again anchored under Mount Hermoso. While some officers and men were on shore there, building a sea-mark on the mount, and otherwise employed for the survey, a gale of wind came on from S.E., which soon sent so heavy a sea into the roadstead near the mount, that the Beagle was obliged to strike topmasts and veer a long scope of cable upon two anchors, besides having another under foot. Unluckily, our party on shore had only one day's provisions, so while the gale lasted their situation was sufficiently disagreeable; the keen air and hard exercise sharpening their appetites, while they had nothing to eat after the first day; and having no guns, they had no prospect of procuring anything. Mr. Darwin was also on shore, having been searching for fossils, and he found this trial of hunger quite long enough to satisfy even his love of adventure.
Posted by Arborfield at 05:05