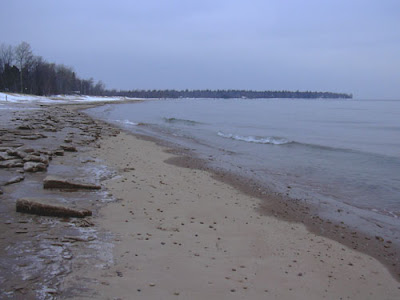 Bahia Blanca
At day-break things wore a very bad appearance. The sky looked dirty & it blew a gale of wind; a heavy surf was roaring on the beach; & what was the worst of all the men thought this weather would last. The Beagle was pitching very deeply & we thought it not impossible she would be forced to slip cable & run out to sea. We afterwards heard she rode it out well, but that some of the seas went right over her, although having 120 fathoms of cable out. It was now time to look after our provisions: we breakfasted on some small birds & two gulls, & a large hawk which was found dead on the beach. Our dinner was not much better, as it consisted in a fish left by the tide & the bones of the meat, which we were determined to keep for the next day. In the evening however to our great joy & surprise the wind lulled & the Captain in his boat was able to come within some hundred yards of the coast; he threw over a cask with provisions which some of the men swam out to & secured. This was all very well; but against the cold at night there was no remedy. Nothing would break the wind, which was so cold that there was snow in the morning on the Sierra de Ventana. I never knew how painful cold could be. I was unable to sleep even for a minute from my body shivering so much. The men also who swam for the provisions suffered extremely, from not being able to get warm again.
.
Captain Robert Fitzroy:
Directly it was possible to put a boat on the water, one was sent, with provisions secured in a cask which was thrown overboard at the back of the surf, and soon drifted ashore to the famishing party. This gale lasted several days, and proved to us not only how heavy a sea is thrown into this bight, by a south-east gale; but also, that the holding-ground is sufficiently good to enable a ship to withstand its effects.
Posted by Arborfield at 08:54