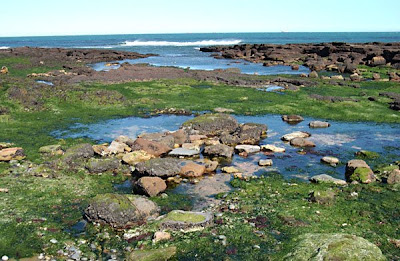 Port Desire (Puerto Deseado)
Arrived at Port Desire. Our passage has been a very long one of seventeen days; the winds generally being light & foul, with the exception of a fresh gale or two.

The Adventure delayed us: she is found not to sail well on a wind; & at this place her sails will be altered. The harbour of Port Desire, is a creek which runs up the country in the form of a river: the entrance is very narrow; but with a fine breeze, the Beagle entered in good style.

Captain Fitzroy’s Journal:
… the Liebre entered the river again, and anchored near Carmen.
Syms Covington’s Journal:
Coast of Patagonia, Port Desire. Arrived at Port Desire December 23rd; went upriver to water the same day. The river is about three quarters of a mile wide. On the North side stands the remains of a small Spanish settlement that formerly was there: several houses with small citadel large enough, I should think for a hundred people. The buildings are all of stone, but the inhabitants were found missing (some years since), and have never since been heard of. It is supposed they were massacred by the Indians; the Indians appear to have a mortal hatred of the Spaniards.
Posted by Arborfield at 18:21