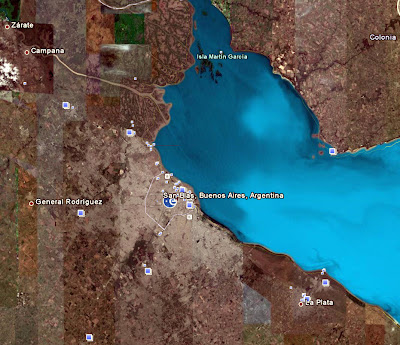 [Image: Google Earth]
Captain Fitzroy’s Journal:
On the 3d of December the Beagle anchored off San Blas (as formerly mentioned). Both schooners went out to her, and in returning at night into San Blas Bay, working to windward with a strong flood tide, they passed close to an unknown rock which would have made an end of their cruise had they touched it. The least water they had, however, was eight feet;* but both vessels were close to it, while the tide was running four or five knots. This rock is in the middle of the entrance to San Blas Bay. At midnight they reached their anchorage, without a dry article in either vessel.
· The Paz drew five feet and a half, the Liebre four feet.
Posted by Arborfield at 21:46