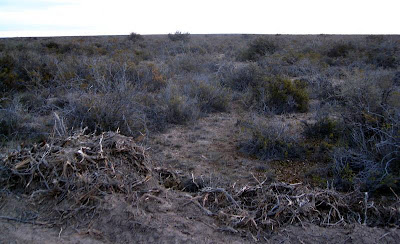 Port Desire
Took a long walk on the North side: after ascending some rocks there is a great level plain, which extends in every direction but is divided by vallies. I thought I had seen some desert looking country near B. Bianca; but the land in this neighbourhood so far exceeds it in sterility, that this alone deserves the name of a desert. The plain is composed of gravel with very little vegetation & not a drop of water. In the vallies there is some little, but it is very brackish. It is remarkable that on the surface of this plain there are shells of the same sort which now exist & the muscles even with their usual blue colour. It is therefore certain, that within no great number of centuries all this country has been beneath the sea. Wretched looking as the country is, it supports very many Guanacoes. By great good luck I shot one; it weighed without its entrails &c 170 pounds: so that we shall have fresh meat for all hands on Christmas day.

Captain Fitzroy’s Journal:
At daylight on the 24th, Corporal Williams was missed, supposed to have fallen overboard in the night, while asleep. He slept on deck sometimes, when tormented by musquitoes; and as the Liebre's weather-cloth rail was but a few inches above the deck, he might possibly have rolled overboard into the stream, which would immediately have carried him away.
Syms Covington’s Journal:
This Port Desire is much the same as other parts of Patagonia, viz. sandy hills with very bad brackish water, and that obliged to dig for; but some of the valleys are very pleasant: in season there are plenty of wild cherries. They were nearly ripe at this time; I ate some which were rather tart, but tasted pleasant. Birds are not so numerous nor so splendid here as in many other parts of South America, but of course they are less well known. About this part no deer were seen, but immense quantities of guanacos, also lions, foxes, ostriches and aperea or guinea pig. The cliffs are full of fossil shells.
Posted by Arborfield at 06:24