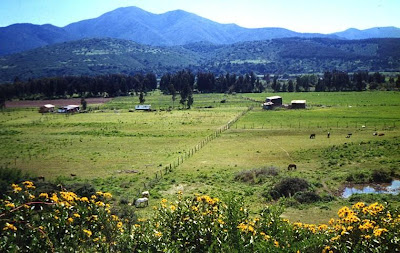 Valparaiso
On the next day I returned to wards the valley of Quillota. The country was exceedingly pleasant, just what I fancy Poets mean by Pastoral, green open lawns separated by small valleys & rivulets; the cottages of the shepherds being scattered on the hill sides. At the base of the Sierra de Chilicauquen, which we were obliged to pass, there were many fine evergreen forest trees, which however only flourish in the ravines where there is running water. A person who had only seen the country near Valparaiso would never dream there were such picturesque spots in Chili.

As soon as we reached the brow of the Sierra, the valley of Quillota was immediately under our feet. The prospect was one of remarkable artificial luxuriance. The valley is very broad & quite flat, & is thus easily irrigated in all parts; the little square gardens are crowded with orange & olive trees & every sort of vegetable. On each side huge bare mountains arise & this contrast renders the patch-work valley the more pleasing. — Whoever called Valparaiso the "valley of Paradise" must have been thinking of Quillota. — We crossed over to the Hacienda de San Isidro, situated at the very foot of the Bell mountain.
Posted by Arborfield at 20:09