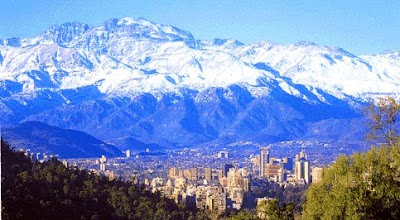 Valparaiso
After crossing many low hills we descended into the small land-locked plain of Guitròn. In these basins which are elevated from 1000 to 2000 feet above the sea, two species of Acacia, which are stunted in their forms, and stand wide apart from each other, grow in great numbers. I do not know the cause, but they never seem to live near the sea, & this gives another characteristic mark to the scenery of these basins. We crossed a low ridge which separates Guitron from the plain on which St Jago stands: the view was here preeminently striking, the dead level surface, covered in parts by woods of Acacia, & with the city in the distance, abutted horizontally against the base of the Andes, their snowy peaks bright with the evening sun. This was one of those views, where immediate inspection convinced me that a plain now represents the extent of a former inland sea. There was equally little doubt, how much more beautiful a foreground a plain makes, where distances can be measured, than an expanse of water. We pushed our horses into a gallop & reached the city before it was dark.
Posted by Arborfield at 08:06