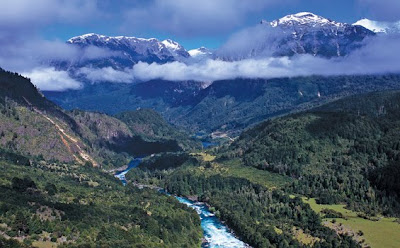 Valparaiso
These copper mines are superintended by a shrewd but ignorant Cornish miner; he has married a Spanish woman & does not mean to return, yet his admiration for Cornwall was unbounded; he never ceased to descant upon the wonders of the mines. Amongst other questions, he asked me, now that George Rex was dead, how many of the family of Rex's were yet alive. This Rex certainly is a relation of Finis who wrote all the books.

The copper ore is shipped to Swansea to be smelted, hence the mines have a singularly quiet aspect to those in England, here there is no smoke or furnaces or great steam-engines to disturb the quiet of the surrounding mountains. — The government encourages the searching for mines by every method, the discoverer may work a mine in any ground by paying 5 shillings, & before paying this he may try for 20 days, although it might be in the very garden of another man. It is now well known that the Chilian method is the cheapest of working the mines; my host here says that only two great improvements have been introduced by the foreigners; the one is reducing, by previous roasting, the white copper ores, which being some of the best in Cornwall, the miners were here astonished to find thrown away; the other is stamping the scoriæ which comes from the furnaces, by which process small particles of copper are recovered in abundance. Improvements likewise have been introduced into some of the simple machinery; but even to this day, in some mines the water is removed by men carrying it up the shaft in skins on their backs! — The labouring men work very hard; they have little time allowed for their meals, & during summer & winter they begin when it is light & leave off at dark. — They are paid one pound sterling a month & their food given them: consists for breakfast of sixteen Figs & two small loaves of bread; for dinner boiled beans, for supper broken roasted wheat grains. They scarcely ever taste meat; as with the twelve pound per annum they have to clothe themselves & support their families. — The miners who work in the mine itself have twenty-five shillings per month, & are allowed a little Charqui. — But these men only come down from their bleak habitation once every fortnight or three weeks.

I staid here 5 days & throughily enjoyed scrambling in all parts of these huge mountains; the geology was, as might be expected, very interesting; the shattered & baked rocks traversed by dykes of formerly melted greenstone showed what commotion has taken place during 478 the formation of these mountains. — The appearance of the mountains is the same as has been described; dry, barren mountains dotted over with bushes. — The Cacti were very numerous; I measured one of a depressed globular figure; including the dense spines, it was 6 feet 4 inches in circumference, height 1ft..9 ins. The height of the ordinary cylindrical branching kind is from 12 to 15 feet, circumference of a limb (with spines) 3ft: 7 inches.
Posted by Arborfield at 08:23