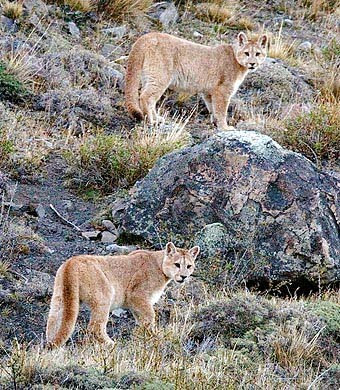 Valparaiso
During my stay at this place, I had observed that there were very few Condors to be seen; yet one morning there were at least twenty wheeling at a great height over a particular spot: I asked a Guasso what was the cause, he said that probably a Lion had killed a cow or that one was dying; if the Condors alight & then suddenly all fly up; the cry is then "a Lion" & all hurry to the chace. — Capt Head states that a Gaucho exclaimed "a Lion" upon merely seeing one wheeling in the air. — I do not see how this is possible. The Lion after killing an animal & eating of it, covers the carcase up with large bushes & lies down at a few yards distance to watch it. If the Condors alight, he springs out & drives them away, & by this means commonly discovers himself. There is a reward of Colts & Cows. — I am assured that if a Lion has once been hunted, he never again watches the carcase, but eating his fill, wanders far away. They describe the Lion in these hunts as very crafty; he will run in a straight line & then suddenly return close to his former track & thus allow the dogs to pass by & completely puzzle them. The Guasso's possess a particular breed of small dogs, which by instinct (like pointers set) know how to spring at the Lions throat & will very commonly kill him single-handed. The man at the baths had one. I never saw a more miserable creature to attempt fighting with so large an animal as the Puma. — From the uneven nature of the country nearly all these animals must be killed with dogs. — It is rather singular that the Lions on this side of the Cordilleras, appear to be much more dangerous than on the other. At Jajuel I heard of a man being killed & here of a woman & child; now this never happens in the Pampas. There being no deer or ostriches in Chili obliges them to kill a far greater number of Cattle; by this means perhaps they learn to attack a man. — It would also appear that the Lion is here more noisy, roaring when hungry & when breeding.
Posted by Arborfield at 07:23